May 25, 2018
The recently released poll from the UCA included a section of results concerning Salvadorans'  preferences heading towards the 2019 presidential elections: 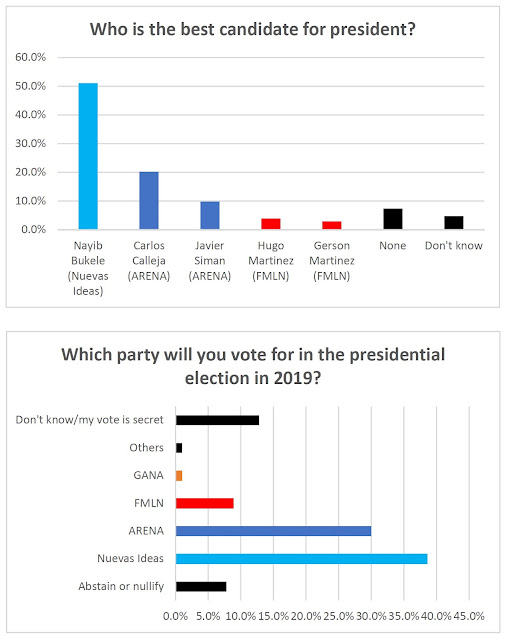 As previously noted, the polls don't look good for the FMLN next year.   But this poll provided the first good news for the conservative ARENA party.  Although on the question of "who is the best candidate" ARENA's nominee Carlos Calleja trails Nayib Bukele 50% to 20%,  when voters are asked which party they will vote for, Bukele's Nuevas Ideas leads ARENA by only 8.5%.  For those who may not be familiar with presidential elections in El Salvador, the ballot does not contain the names of candidates, but only the logos of the various political parties.  Voters mark the ballot with an X over the party of their choice for president.

But there is a long time to go, and Bukele's party is not yet even officially recognized or entitled to be on the ballot.

David said…
Tim - however, it is significant that a "party in formation" like Nuevas Ideas, that is totally new (as a brand) and is not yet registered, outpolls the two main parties which have have had 35+ years to build their base of support!

In a stand-alone presidential contest, the party won't matter - people will vote for the person. The fact that a candidate's face and name are not on the ballot will not be a significant factor.
3:58 AM