May 10, 2018
The human rights organization Cristosal has released its annual report on forced displacement in El Salvador which looks at the situations of families who were forced to flee their homes and seek refuge in some other part of the country.   The study is based on Cristosal's direct work providing humanitarian support and services to displaced families consisting of more than 700 people and what has been learned from those interactions.

In a release announcing the report, Cristosal described some of its research:


Major findings from the report, which combines data collected from the 701 individuals registered by Cristosal and the Quetzalcóatl Foundation in 2017, include: The report also identifies the causes of forced displacement. The top five reasons people left their homes were threats, murder, attempted murder, extortion, and injuries. These acts of violence were mostly perpetrated by gangs, but a worrying 15% of families fled, at least in part, because of violence from El Salvador’s National Civil Police or Armed Forces. More than half (58%) of the victims did not report their cases to the authorities, many because they were afraid doing so would make them targets of further violence.

At the forum where Cristosal presented its findings, the Minister of Justice and Public Security Mauricio Ramírez Landaverde made a rare acknowledgement that some cases of forced displacement were caused by governmental security forces:

There are members of the Police and the Armed Forces that generate cases (of internal displacement).   We have cases; civil society has more.

Last year, Cristosal's advocacy produced a first of its kind ruling from the Constitutional Chamber of El Salvador's Supreme Judicial Court requiring the government to protect a family that had been forced to seek protection as a result of danger from both gangs and elements of the security forces

The government of El Salvador has long been reluctant to acknowledge the problem of forced displacement.  Apparently feeling that acknowledging the existence of thousands of internal refugees would acknowledge the failure of its security policies, the government has previously refused to talk about it.

However, in March of 2018, the Ministry of Justice and Public Security released a study titled Caracterización de la movilidad interna a causa de la violencia en El Salvador, which provided polling results regarding movements of persons from 2006-2016 as a result of violence.

This chart within the Ministry of Security report shows the percentage of the population moving from or moving to different municipalities as a result of violence.  It tracks closely to recognized pockets of gang activity: 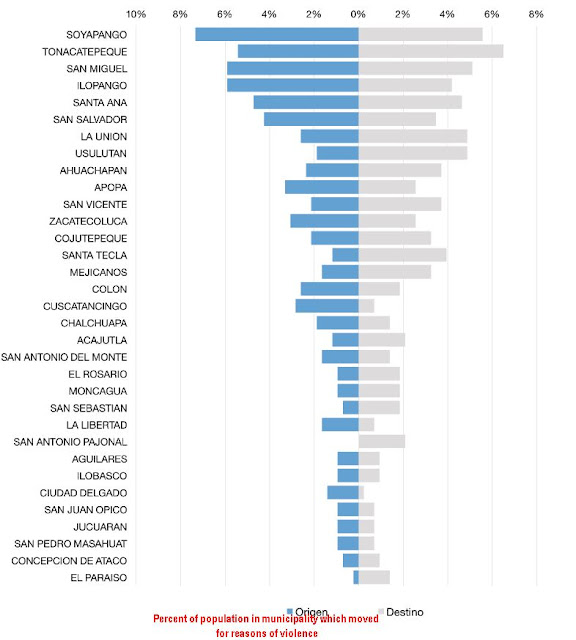 Forced displacement of families has a serious economic consequences.   People give up jobs and schooling.  Family resources poured into a house are left abandoned.   Stress related diseases increase.

With El Salvador's government only grudgingly acknowledging the crisis, insufficient resources are devoted to the care and protection of victims.    These are victims who not only need physical protection from those persons who would subject them to violence, but who also need assistance in housing, education, healthcare and employment.   Failure to address these real humanitarian needs only produces more external migration, as persons who cannot find a safe and dignified life in El Salvador flee for refuge in other countries.

You can find an executive summary of the Cristosal report in English here and the full report in Spanish here.   There is also an interview on El Faro Radio with Celia Medrano, regional program director for Cristosal, available here where she discusses the report and forced displacement.