FMLN goes down to defeat in El Salvador 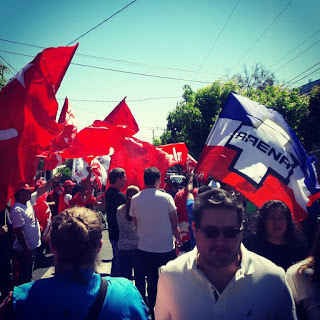 El Salvador conducted elections for its National Assembly and all mayor's offices on Sunday.   With El Salvador's overly complex system for electing the legislature, only about 60% of the vote has been counted as of Monday morning.   But the results seem clear that voters dealt the FMLN  a major defeat.  The primary beneficiary of the voters' rejection of the left wing party was the conservative ARENA party.

At this point on Monday morning, it is too early to tell how many deputies ARENA won in the National Assembly and who they will be.   It seems unlikely that they will have a majority, but they will pick up seats beyond their current 35 seats in the 84 members National Assembly.

For mayor, ARENA appears to have won the largest prize of San Salvador.   Ernesto Muyshondt is leading Jackeline Rivera by more than 2-1 with 70% of the vote counted.  ARENA also appears to have won or be leading in the elections in most other major cities in the country.  The exception is San Miguel where the FMLN candidate is leading in a very locally-focused race.