March 08, 2018
There are many aspects of El Salvador's elections last Sunday worth pondering.   Some of those aspects are noted below, reflecting comments from a team of election observers I led, as well as analysis of news reports and official announcements.

As noted in my previous post, the FMLN suffered a major defeat last Sunday as voters fled from the party.   Preliminary results show the party falling from 31 seats in the National Assembly to just 22, while conservative ARENA may have as many as 40 seats in the 84 seat legislature: 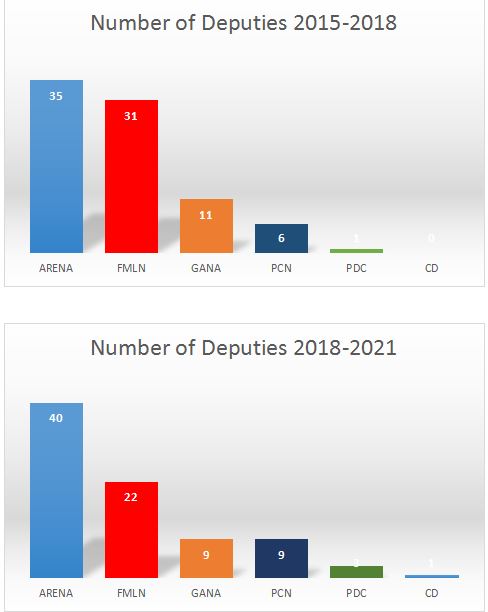 Note:  the results from the most recent election are preliminary, and there may be movements of a deputy or two.

These results mean that the FMLN by itself cannot block any legislative action requiring a 2/3 (56 vote) super majority such as the appointment of Supreme Judicial Court magistrates, the Attorney General, the Human Rights Ombudsperson, or international borrowing.   Nor can the FMLN sustain a veto by president Sanchez Ceren of legislation which might be passed by the right wing majorities in the National Assembly.

In addition to its defeats in the legislature, the FMLN holds a reduced number of municipal councils, including its loss of the capital city of San Salvador.

But it would be wrong to assume that right wing ARENA was suddenly more popular in El Salvador.   Although hundreds of thousands of voters abandoned the FMLN, ARENA also lost voters compared to its vote totals in 2015: 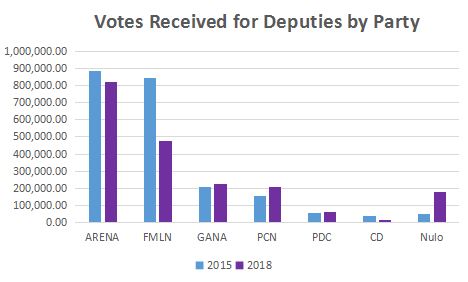 This reflected what I was hearing from many long time FMLN partisans.   They were unhappy and disappointed with the party leadership and its lack of success governing, but they also had no interest in voting for ARENA, which they still associate with its founding by death squad leader Roberto D'Aubuisson and its defense of oligarchic interests of the wealthy.

The smaller parties in El Salvador garnered some additional votes, but the biggest increase was the so-called "voto nulo" or null vote where voters scribbled phrases such as "out with the rats" on their ballots showing a rejection of all the parties and politicians.    The increase in null votes was tied to a campaign in social media by San Salvador mayor Nayib Bukele and others, asking voters to send a message of rejection of the current system.

Some positives of the process.

Twenty-six years after signing of peace accords which ended a bloody civil war, El Salvador's elections show a maturing democracy.  The most heard word to describe conditions at polling places throughout the country was "tranquilo" or peaceful.    Political violence was almost completely nonexistent, and even El Salvador's abnormally high homicide rate took a day off with only one murder reported in the entire country.

Equally important was the acceptance of the results by the FMLN.    Party leadership quickly acknowledged their defeat and did not call their militants out into the street to protest or make claims of electoral fraud.


Negatives in the process.

Voter turnout in the election fell from previous elections.   There seemed to be little doubt that the low turnout reflected voters' general level of disapproval of parties, politicians and corruption.   The campaign was not marked by a very high level of discourse -- a frequently heard comment was "every politician just promises to build or improve the soccer field in our community or fix our streets, and they never do."

The Supreme Electoral Tribunal did not accomplish the requirement of a ruling from the Constitutional Chamber that the vote receiving boards be made non-partisan.   The Tribunal acted slowly to recruit, and later draft, citizens to work at the polls.   And then when it did have non-partisan poll workers, according to reporting by El Faro, the Tribunal let them go in favor of poll workers selected by the parties.

The ugly in the process.

The 2015 election for deputies to the National Assembly had been a disaster.  2015 was the first election where voters could vote for candidates for multiple different parties, and election officials could not make the process work.   Results were delayed for weeks.

Although the Tribunal had three years to prepare for a new try, there was a major glitch.     An election computer software company named Smartmatic revealed that there was a bug in a script which processed the election results for individual deputies to the National Assembly.   Suddenly, where results posted on the Tribunal website had previously shown candidates such as Renee Cuadro Portillo of ARENA, and Eeileen Romero and Cristina Lopez of PCN at the bottom of  voter's preferences from their parties, updated results elevated those politicians towards the top of their respective lists.

Although there seems to be grudging acceptance that this was probably a computer error, the mistake has fueled conspiracy theories and has led to demands that Smartmatic explain itself.   Smartmatic will also have to correct its own website, which currently states that the company had processed over 3.7 billion votes worldwide without a single discrepancy.

What this all means for El Salvador.

Social activists and civil society groups on the left are worried.   They fear that a new powerful conservative block in the National Assembly led by ARENA will roll back progress made in the nine years since Mauricio Funes was elected the first president under the FMLN banner.   With the ability to appoint magistrate to the Supreme Judicial Court and the Attorney General, conservative forces will control all but a vastly weakened executive branch.   Civil society groups are already calling on their members to mobilize themselves for the struggle ahead.

Nayib Bukele remains the most popular politician in El Salvador.   If he succeeds in his presidential ambitions in 2019, he would lead without any members of his own (not yet formed) political party in the National Assembly.   But also look for this new National Assembly to seek ways to thwart a Bukele candidacy.

The FMLN may rethink its plans for the 2019 presidential election.   Before last weekend, the probable candidate for the FMLN was Gerson Martinez, but he is closely associated with the old-line leadership of the party that just went down in flames.   There will be an internal struggle within the party in coming weeks as it decides whether to continue with Martinez.

The election season in El Salvador has not ended.    There are just 12 months before the vote for president.

The FMLN joined the ranks of the "Ricos" and emulated the old power structure to a "T".

Big promises after the Peace Accord. No deliveries of last merit.

The people, democratically, voted the promise makers out. That's the price a politician pays when she/he is finally seen as a "promise breaker"...and one who is living well and with Privilege as a result.

Tom said…
Once again a great analysis Tim. Thank you so much.
10:29 AM