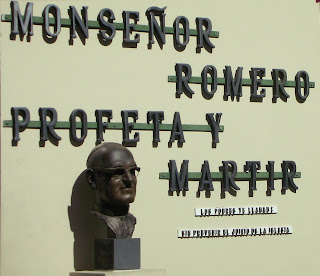 El Salvador received the news it has been waiting for -- the Roman Catholic church will soon canonize slain archbishop Oscar Romero.   Expert in all things Romero related, Carlos Colorado, was one of the first to break the news:

Blessed Oscar A. Romero will be canonized this year—probably on October 21 in a group canonization ceremony that will include Pope Paul VI amid a synod of bishops in the Vatican—but Father Rutilio Grande, Servant of God, will probably not be ready for the altars until next year. This is the analysis of Super Martirio after reviewing the most up-to-date information on the status of both causes.

The Vatican Secretary of State confirmed on Tuesday that Paul VI will be canonized in October.

On the one hand, the information augurs a triumphant result in the case of Archbishop Romero, the martyred bishop whose cause is now on the verge of being formalized, having concluded the entire course of the process (see chart below). At this time, Romero has reached the same level of approval as Paul VI, whose upcoming canonization was informally referred to by Pope Francis. The pope’s approval of the miracle that leads to Romero’s canonization could arrive this week, after a session of the Congregation for the Causes of Saints on Tuesday that could produce more decrees to be approved by the Pope.

On the other hand, however, the information also implies the frustration of the Salvadoran Church’s dream of seeing Romero canonized and Grande beatified together, in a single ceremony.

Carlos also reports on the approval of a miracle attributed to Romero and the possible debate over the location of the canonization:


Pope Francis has approved a decree recognizing a miracle attributed to Blessed Oscar Romero, opening the path for the Salvadoran martyr to be canonized a saint. Francis approved the miracle on Tuesday, March 6, 2018, alongside a miracle allowing for the canonization of Pope Paul VI. The Italian bishops’ conference newspaper, Avvenire, reports that the miracles for the two men were approved together at every step of the process, including approvals by doctors, by theologians and by cardinals and bishops.

Romero is now set to become the first-ever saint born in any Central American country, and the first post-Vatican II martyr to be canonized by the Church.

The news is likely to unleash fierce debate about where the canonization should take place. The leading options are to canonize Romero in a group that will also include Pope Paul VI on October 21, during the Synod of Bishops on the vocational discernment of the youth (at the Vatican); the other option is to canonize Romero during World Youth Day in January 2019 in Panama, perhaps allowing time for the cause of his friend, Rutilio Grande, to catch up with Romero’s cause so that Romero may be canonized and Grande beatified in the same ceremony. A Salvadoran newspaper, Diario CoLatino, reports that the Salvadoran bishops have asked Rome to do it in Panama to be in Central American lands.

Carlos reminds us of the process for sainthood in the Roman Catholic church:


Recognition of the saints in the Catholic Church consists of two stages. In the first, the person is declared a blessed, either for their "heroic virtue" or, in the case of Romero, for having been killed in "hatred of the faith." In that case, the person is called a martyr. Romero achieved that status in 2015, after a prolonged study that was hampered by ideological differences outside and inside the Church over whether the murder was committed out of hatred of faith or for political reasons. In the second stage, it takes a miracle to establish that the candidate has heavenly approval—a stage that Blessed Romero has now cleared.