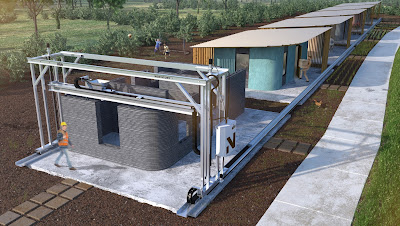 From a report on CNN:


El Salvador may be the first country to have a community of 3D-printed homes.

A nonprofit called New Story is raising $1 million to bring more than 100 3D-printed homes to the country over the next two years. The organization funds homes for families in need and people displaced by natural disasters.

"We want to bring this to the families who need it the most," CEO and cofounder Brett Hagler told CNN last week. .


The 3D printed home that ICON and New Story just unveiled in Austin is a proof-of-concept for sustainable home-building that will build safer, more affordable homes for more people at a faster rate than ever before – the Vulcan is capable of 3D printing a 600- to 800-square-foot home, for $4,000, in less than 24 hours in an under-served community.

ICON has also developed some new materials for this project, which have been tested to widely recognized standards of comfort, resiliency, and safety.

In the next 18 months, New Story hopes to 3D print the first full community of homes for under-served families in El Salvador, using ICON’s advanced materials and the Vulcan 3D printer. Then, with the help of new partnerships, the goal is to scale up production in order to serve more communities in the coming years.

El Salvador suffers from a significant deficit in housing which meets minimal standards for habitation.  The deficit affects hundreds of thousands of families in both urban and rural areas of the country according to a November 2016 study by the Centro Latinoamericano para la Competitividad y el Desarrollo Sostenible (CLACDS) of INCAE Business School and Habitat for Humanity.

You can read more about New Story and its plan to use technology to bring affordable housing to poor communities around the world at its website here.  A video explains the concept: