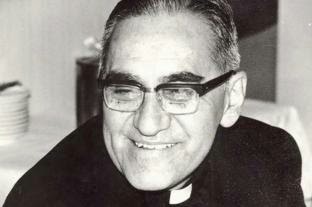 Today is the 38th anniversary of the martyrdom of archbishop Oscar Romero, slain by a sharpshooter's bullet while saying mass.  Thirty-eight years later, the Roman Catholic church will officially canonize Romero as a saint.   The sniper's bullet failed to silence the message of this prophet and martyr who was a "voice for the voiceless."

The anniversary of Romero's deaths falls this year at the beginning of Holy Week.  Forty years ago, in Holy Week, Romero preached these words in one of his sermons:

Christ would not be Redeemer
if he had not concerned himself with giving food
to the crowds that were hungry,
if he had not given light to the eyes of the blind,
if he had not felt sorrow for the forsaken crowds
that had no one to love them, no one to help them.
Christianity cares about human development,
about the political and social aspects of life.
Redemption would not be complete
if it did not consider these aspects
of the Christ who chose in fact to be an example
of one oppressed under a powerful empire
and under a ruling class of his people
that savaged his reputation and honor
and left him on a cross.
MARCH 26, 1978