February 22, 2018
El Salvador's Secretary of Participation, Transparency and Anti-corruption (SPTA), Marcos Rodríguez, has published for the first time a report of donors and their money flowing to Salvadoran political parties from 2006-2017.  It is probably not a surprise that the conservative ARENA party, backed by El Salvador's wealthy and businesses, received the bulk of political donations.   ARENA disclosed $44.5 million in donations between 2006 and 2017 compared to only $13 million for the FMLN: 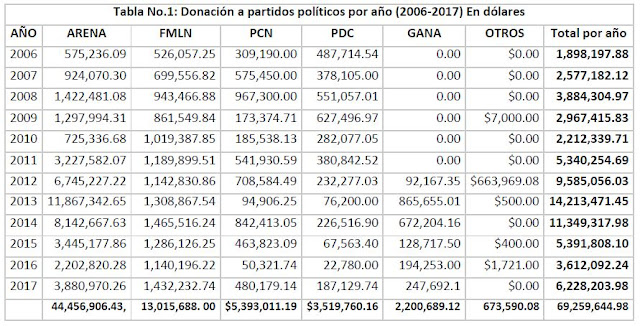 The report discloses that the single largest donor to ARENA or any political party was a non-profit entity named the "Centro de Estudios Políticos 'Dr. José Antonio Rodríguez Porth.'"  (the "Centro").  The Centro donated $12 million between 2011 and 2014, or more than a fourth of all donations disclosed by ARENA.

Who is the Centro?   According to reporting done by El Faro, the Centro was created in 2002 by leading officials and backers of the ARENA party for "political education" purposes.  El Faro also reported that a $10 million donation from the country of Taiwan to ex-president Flores designated for earthquake relief, flowed through the bank accounts of the Centro on its way to supporting ARENA political activities from 2003-2004.   Flores died in jail prior to his trial on corruption charges related to the diversion of the $10 million.  No one else related to the Centro was ever charged.

Now the Centro is the largest donor to ARENA, sending more than $12 million in new money between 20011 and 2014 into the bank accounts of the right wing party.   What the newly released report does not reveal is the source of the funds in the hands of the Centro.   Who is funneling dollars through the Centro into ARENA?

The website of the SPTA containing the new political donations report as well as the underlying data can be found at http://www.donantespartidos.info.     In reviewing this information, keep in mind that this data represents donations actually reported by political parties to the government.   It is not safe to assume that all donations were ever reported by the parties.
2018 elections ARENA Corruption Politics