February 13, 2018
A recent article titled El Salvador: life in Mara Salvatrucha’s territory, by Sofia Martinez, an analyst with International Crisis Group offers one outsider's perceptions of life in a Salvadoran neighborhood controlled by MS-13.  She writes:


We take a detour from the main road to get to the community we are to visit. Through our van’s unpolarized windows we soon see it. The atmosphere is amazingly calm. It is about four o'clock in the afternoon, and a caravan of uniformed schoolboys is making its way home along the edge of the road under the cool shade provided by the extremely thick trees.

Our van bumps to the end of the unpaved road and the silhouettes of a group of young people come into view. Some of them are wearing caps and have no t-shirts on, while some stand and others sit at what appears to be an improvised roadblock.

We slow down, lower the windows, and one of the community leaders who is with us extends his arm to greet the MS-13 soldiers, one of the lowest ranks in the gang hierarchy.

They indicate with a gesture that we can keep going. I watch the scene out of the corner of my eye, trying not to lose sight of the road ahead while concealing the artificial expression of tranquility on my face. 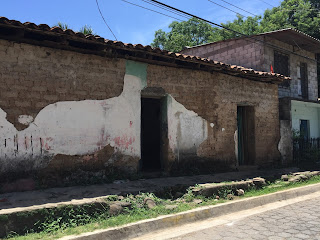 The descriptions by Martinez mirror mine own experiences.   During my time in El Salvador, I am frequently in certain communities controlled by one or another of El Salvador's gangs.   My wife and I are known there, we are viewed as harmless and never have any problems, but we also stay within limits which we know exist.

Another anecdote illustrates the ways of life in gang-controlled territory.  We were visiting a local public health unit in a neighboring community controlled by the same gang.   We went with a well known community leader.   Outside the health unit, two gang "posts" or watchmen were clowning around and equipped with white earbuds to stay connected with others elsewhere.  Yet there was an air of normalcy as people from this gang-controlled community came and went, and the clinic itself had its own security guards who seemed to pay no attention to the foot-soldiers of a deadly gang stationed outside.

This is the paradox of life today in El Salvador.   There are limits and boundaries and rules enforced by the different gangs with ruthlessness.   Yet within boundaries, life can almost seem normal with school children in uniforms and churches and health clinics.