The race for mayor of San Salvador

January 13, 2018
The mayor's office of San Salvador is one of the most prominent political positions in El Salvador after the position of president.   It is a position which has gone back and forth between the major political parties over the past 25 years.    The current holder of the post, the popular Nayib Bukele, is not running for re-election after he was expelled from his former party, the FMLN. 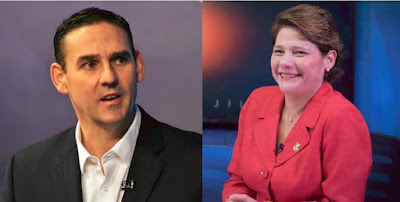 The candidates proposed by the major political parties are:


Both candidates are currently deputies in the National Assembly.  Opinion polls released in November and December of 2017 gave a fairly substantial lead to Muyshondt, but there are still large groups of undecided voters.    It could be that voters are undecided because they do not know who the candidates for mayor are.   The recent UCA poll showed that more than 80% of those polled did not know the names of the two major party candidates.

The announced proposals of both Muyshondt and Rivera are actually quite similar.   Both want to address the problem of traffic in the capital city.   Both want to take abandoned properties in the center of the city and put them to public use.    Both claim to have programs designed for young people, in an attempt to claim the supporters of Bukele.

Both major candidates have some negative factors to overcome.    Rivera faces a backlash against the FMLN for having kicked the popular Bukele off the ballot for mayor.    Muyshondt has had to deal with the scandal of being recorded dealing directly with gang leaders.  On the video recorded before the second round of the 2014 presidential election, he is seen discussing with gang leaders possible changes in security measures ARENA could make if Norman Quijano was elected.

One wild card in San Salvador's 2018 mayoral election could be Nayib Bukele.  He has not endorsed anyone in the campaign, and it would be surprising to see him do so.   But Bukele loves the spotlight, so he may still try to show how much influence he has.

Also on the ballot, but with little chance of winning, from the smaller political parties will be: