More on termination of TPS for El Salvador 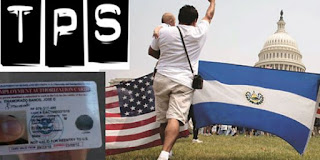 Here is some additional information about the decision by the Trump administration today to cancel Temporary Protected Status for El Salvador.

The full text of the announcement by Secretary of Homeland Security Kirstjen M. Nielsen is here.  Beyond the fact that TPS is terminated by her decision, there are a few other important points in the announcement.   First, the statement throws the ball back into Congress' lap:


Only Congress can legislate a permanent solution addressing the lack of an enduring lawful immigration status of those currently protected by TPS who have lived and worked in the United States for many years. The 18-month delayed termination will allow Congress time to craft a potential legislative solution.

In many ways, the Trump administration's action directly parallels the steps it took with DACA.    Trump and DHS cancelled both programs, but with an effective date many months away.   The administration then said "Congress can fix any problem if it needs to be fixed."      Do not blame the administration. Blame Congress if there needs to be any permanent fix."  The Salvadoran Foreign Ministry vowed to work with allies in Congress to get a legislative fix to the end of TPS.   While there are currently bills introduced in Congress which would offer green cards to TPS beneficiaries, it is not clear that there is sufficient political support to pass them.

Second, the announcement creates an 18 month grace period until September 19, 2019 for TPS holders to leave:


To allow for an orderly transition, the effective date of the termination of TPS for El Salvador will be delayed 18 months to provide time for individuals with TPS to arrange for their departure or to seek an alternative lawful immigration status in the United States, if eligible. Salvadorans in the United States who benefited from TPS may still receive other protections under our immigration system for which they are eligible.

The 18 months will also provide time for El Salvador to prepare for the return and reintegration of its citizens. During this timeframe, DHS will work with the Department of State and the Government of El Salvador to help educate relevant stakeholders and facilitate an orderly transition. In addition to materials posted online, DHS components will participate in outreach activities such as teleconferences, town halls and roundtables to ensure that affected populations have a full and accurate understanding of their rights and obligations.

In El Salvador, the government seized on the grace period as a form of victory.   President Salvador Sanchez Ceren issued a statement which characterized the 18 month grace period as an  "extension" (prórroga) of TPS for Salvadorans recognizing their important contributions as a work force in the US.  The FMLN  called the grace period a prórroga and labelled it an "achievement" of the government.   The president and his party were widely chastised on social media for such a characterization of the cancellation of the program.


The Salvadoran Foreign Ministry tried to pat itself on the back  by asserting that the 18 month grace period before Salvadorans with TPS must leave was the longest the US government had ever created when terminating the status for a given country.

Meanwhile, various ARENA politicians blamed the loss of TPS on the FMLN, asserting that the left wing party poorly managed the relationship with the US and was irresponsable in its statements about Washington's role in the world.

Third, Salvadorans with TPS are required to re-register with the US government in order to get the benefit of the grace period:


Salvadorans with TPS will be required to re-register for TPS and apply for Employment Authorization Documents in order to legally work in the United States until the termination of El Salvador’s TPS designation becomes effective Sept. 9, 2019.

It should be noted that re-registering in this fashion will help DHS to have an up-to-date address list when it comes time to deport people in 2019.

Here is some of today's coverage from newspapers in metropolitan areas where large concentrations of Salvadorans currently live: