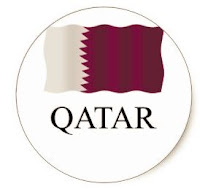 One of the stranger developments in the story of increasing deportations of Salvadorans from the US are the efforts of El Salvador's government to find them a home in Qatar.  One year ago, a Qatar emissary was in El Salvador for the 25th anniversary of the Peace Accords, and the office of El Salvador's president reported that they discussed the possibility of greater investment by Qatar in El Salvador.  Exactly a year later,  the Salvadoran government reported that it was now discussing sending migrant workers to Qatar.

El Salvador is discussing a deal with Qatar under which Salvadoran migrants facing the loss of their right to stay in the United States could live and work temporarily in the Middle Eastern country, the government of the Central American nation said on Tuesday....

Presidential communications chief Eugenio Chicas said El Salvador was in talks to see how Salvadorans could be employed in Qatar, a wealthy country of some 2.6 million people that is scheduled to host the soccer World Cup in 2022.

“The kingdom of Qatar ... has held out the possibility of an agreement with El Salvador whereby Salvadoran workers could be brought across in phases (to Qatar),” Chicas told reporters.

After an unspecified period, the Salvadorans would return home, Chicas added, without saying how many workers the program could encompass.

El Salvador may not be looking after the best interests of its countrymen in striking such a deal.   Qatar, which imports large numbers of unskilled and semi-skilled workers, has been criticized sharply for abusive labor practices.

In response to international criticism, Qatar did recently pass a law which provides a few labor protections to domestic workers.  According to Vox, these changes only address some of Qatar's labor problems:


Qatar is also infamous for exploiting migrant construction workers. In the summer of 2013, dozens of Nepalese workers died from heart attacks, heart failure, or workplace accidents, many of them on projects related to the World Cup, which is slated to take place in Doha in 2022.

About 70 percent of Qatar’s population of 2.7 million people are low-skilled workers, almost all of whom are migrants.

Doha’s decision to give domestic workers labor rights is in part a response to international scrutiny. The International Labor Organization, a United Nations body, had given Qatar until November to improve its labor conditions.

It is a sad state of affairs that El Salvador's government feels that if its citizens are deported from the US, they would prefer to go half a world away to Qatar than to return to their roots in El Salvador.

It was also announced that Qatar and El Salvador signed a memorandum to explore direct air service between El Salvador and the Gulf country.