December 14, 2017
Recent polling by La Prensa Grafica reveals a growing disaffection with the country's two major political parties and a majority of Salvadorans whose political preferences fall between the left and the right.

When asked about their political ideology and whether they identified with the right or left, almost 58% of those polled said "neither", the center, or refused to answer.

This rejection of ideological labels is seen as well in the declining numbers of affiliation with the political parties.    This chart shows the percentage of respondents who stated they affiliated with a particular political party at different points in time: 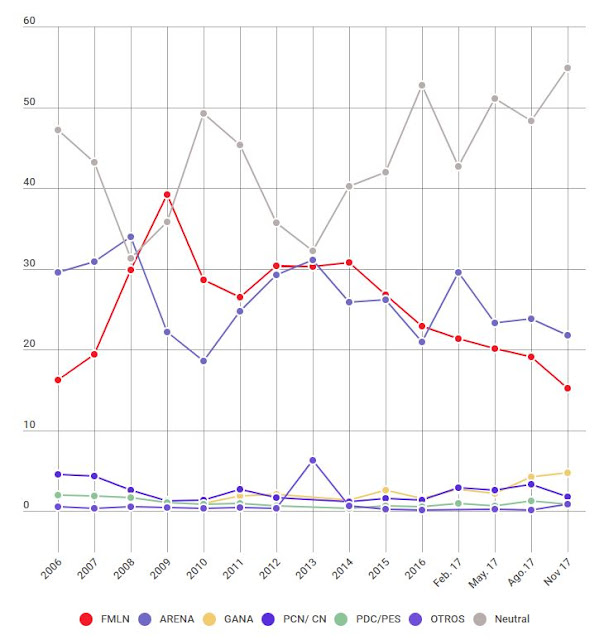 As this chart from the LPG polling shows, "neutral" has grown steadily to around 55%, while neither of the two major political parties, ARENA and the FMLN, can claim more than 25% of the electorate.     It is the FMLN which has seen its fortunes drop most dramatically.  From the start of Sanchez Ceren's presidency in 2014 until today, party support had dropped from more than 30% to approximately 15%.   This drop reflects growing disillusionment with a president who is seen as a weak leader and a party leadership which seems frozen in the past.

This type of polling data is what drives the presidential ambitions of San Salvador mayor Nayib Bukele, campaigning for a new political movement of "new ideas" separate from the old political structures.