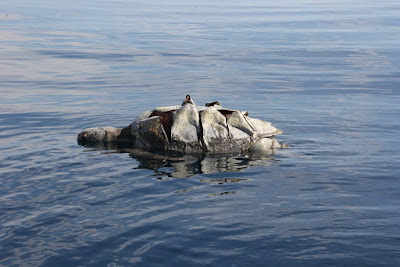 Two weeks ago, between 300 and 400 vulnerable and endangered sea turtles were found floating dead off the coast of El Salvador. The reason for the die off was something of a mystery.


Now scientists at El Salvador's environment ministry (MARN) believe they have identified the factors leading to the sea turtle deaths.    They point to the Pacific tropical storm Selma which struck El Salvador on October 28.   That storm altered the course of currents on which the turtles travel and also stirred up sediments on the sea floor.  The sediments nourished micro-algae which produce saxitoxin, a powerful paralyzing poison     These toxins have been identified in the corpses of dead turtles studied  by the scientists.

Authorities in El Salvador have an ongoing campaign to try and protect the big turtles, several varieties of which come ashore in El Salvador to lay their eggs.  Poachers of eggs and turtles, as well as chemical pollution and fishing nets, are all threats to the turtles.   Several species of turtles are on world endangered species lists.