TPS goes away -- what's next

November 03, 2017
There is news out of Washington D.C. this afternoon that the US will not approve any more extensions of Temporary Protected Status (TPS) for Central American counties which include El Salvador, Honduras and Nicaragua.    According to a report in the Washington Post, the Secretary of State has informed the Department of Homeland Security that conditions in those countries no longer warrant ongoing protection from deportation.

It was not clear from the Washington Post reporting whether Tillerson's letter specifically deals with El Salvador, since only a decision on Honduras and Nicaragua needs to be made next week.  Still, most analysts have assumed that the three Central American countries would be handled in the same way.  Although the Secretary of State does not have the final word, it seems likely that the DHS will follow his lead and terminate TPS for Honduras and Nicaragua next week, and for El Salvador in January 2018.

There are approximately 195,000 Salvadorans who currently enjoy TPS protection, and they have an almost equal number of children who were born in the US and enjoy US citizenship.

So what does the end of TPS mean?    For each person who enjoyed that protection, they revert to their status in 2001 at the time of the earthquakes.  For someone who was undocumented and unknown to the US government, they return to being undocumented but now they are known to the government.   The government would need to commence removal proceedings against that person, a process which can take years in immigration court.   For someone who had a final order of removal already entered, that order will be effective again and they could be immediately picked up and placed on a plane to El Salvador.   For someone who was in the midst of deportation proceedings, their case presumably resumes where it left off, if the government wants to pursue it.

This will not be a situation where suddenly one day 195,000 Salvadorans arrive at Oscar Arunlfo Romero International Airport.   Instead, one can anticipate a growing volume of deportations, as the  Trump administration adds TPS recipients to the queue, along with asylum seekers, unaccompanied minors, refugees and others.

What is the impact for El Salvador?  First, the country has made few preparations to receive them.  San Salvador mayor and 2019 presidential candidate Nayib Bukele retweeted the Washington Post story and commented:  "And it appears that we will lose TPS.   Are we prepared for that?   The president ought to go immediately to try to avoid this catastrophe." 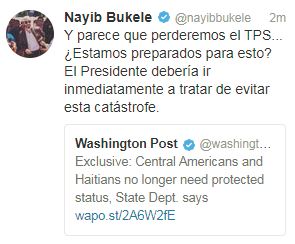 In a country where large portions of the work force are underemployed and working in the informal economy, there is little capacity to absorb an increased flow of deportees, much less the existing flow.

An optimist might say that the country should welcome with open arms the return of productive citizens with the fruits of their years in the United States.   Yet there is little research to suggest that deportees will be coming back with savings and plans to invest those savings in El Salvador.    Moreover, deportees will no longer be sending remittances from the US back to El Salvador to support families here.

It has always been likely that TPS would terminate following the election of Donald Trump.   Now that termination is imminent, there is much to be done.