Salvadorans have highest number of cases in US immigration courts

November 26, 2017
In removal proceedings, where US immigration authorities are attempting to deport a migrant, there are today more open cases against Salvadorans than any other nationality.  This statistic comes from the TRAC immigration database at Syracuse University. 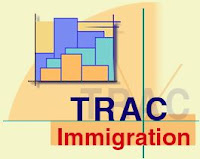 As of the end of October 2017, there were 141,591 open cases involving Salvadoran nationals, which equaled 21.8% of the entire case load of removal proceedings in the US immigration courts.    Mexico had the next largest number of open cases with 140,894.

This is an important number to watch, because it represents the number of Salvadorans "in the pipeline" to potentially be deported, before even considering the effect of a possible cancellation of TPS protection for 195,000 Salvadorans in March 2018.

Certainly not all of these open cases will result in deportations.  For example, thousands of these cases are cases of asylum seekers who may ultimately by granted asylum in the US by an immigration court judge.   In other cases, the government will fail to prove its right to deport the migrant.   Regardless of possible victories for some portion of the migrants, there exists a large bubble of cases about to result in migrants being deported back to El Salvador, a bubble which will get even bigger with ramped-up enforcement activities by the Trump administration.

How long it will take for this bubble to burst upon El Salvador depends on the current backlog in the immigration court system.   Some cases are taking as long as four years to resolve, and so nothing is immediate.

The planes chartered by US migration authorities are going to be landing with increasing frequency at El Salvador's Oscar Arnulfo Romero International Airport and discharging their human cargo.  El Salvador has few resources in place to receive these "deportados," and the country has a sluggish economy with no jobs to support the new arrivals.  Both El Salvador and the US will need to do much more to avoid the serious human costs of the coming deportation wave.