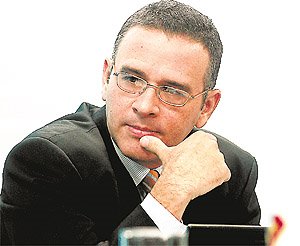 El Salvador's first president to be elected under the banner of the leftist FMLN, Mauricio Funes, was elected in 2009 to great fanfare.   But in November 2017, he is living in exile in Nicaragua and has just been ordered by a Salvadoran court to pay back $419,145 for which he and one of his sons could not explain the origins.   Under Salvadoran law, public officials need to make an accounting for any increase in personal wealth during their time in office, and if they cannot explain it, it is presumed they came by the increase in wealth illicitly.   A separate claim against Funes' ex-wife and current government minister, Vanda Pignato, was dismissed.

Funes immediately launched into another defense of himself from his Twitter account.   Funes announced that he would appeal the decision and challenged the government to prove that any of this money had come from Salvadoran government coffers.  Funes blamed the outcome on pressure from the right in the country.

For his part, El Salvador's attorney general, Douglas Meléndez, called the judgement an historic event without precedent in the fight against corruption.

Funes may still be prosecuted criminally by the attorney general.

Funes' two predecessors in office also faced corruption charges.    Funes' predecessor, Tony Saca, from the right wing ARENA party, is accused of looting the largest amounts.    Saca is charged with diverting more than $246 million of public funds, and currently sits in prison awaiting trial.   Before Saca was Francisco Flores, who died last year awaiting trial on charges that he diverted $15 million in earthquake relief funds received from the government of Taiwan.