Deportation numbers to El Salvador decline by almost half 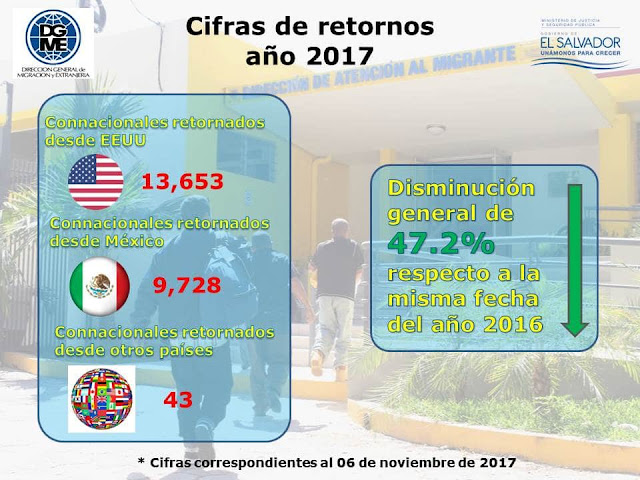 During 2017, El Salvador has seen a reduction of almost 50% in Salvadorans deported back to the country from Mexico and the United States.  Although some might be expecting a large increase in deportations given the rhetoric coming out of Washington, in fact the opposite has been the case so far in 2017.

El Salvador's General Directorate of Migration and Immigration (DGME) regularly publishes statistics about those who are returned to the country by bus (from Mexico) and by air (from the US).  Here are the DGME statistics for the last three years including data through November 6 for 2017:

The reduction in deportations from Mexico almost certainly reflects a reduced flow in migrants leaving El Salvador since Trump came to office and the perception of a hostile environment in the US currently.  Migrants picked up in Mexico by Mexican authorities are returned rapidly and so deportations from that country rise and fall with the migrant flow.

The reasons for the reduction in deportations from the US are more difficult to determine.  Part of the decrease reflects that same reduction in people leaving El Salvador, crossing the border and being quickly deported.   But part of the change reflects differences in the US immigration courts which are not entirely clear either. 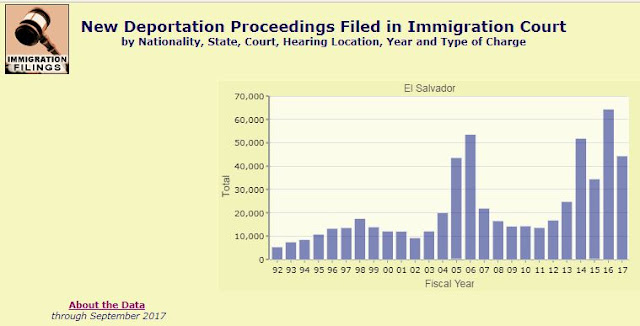 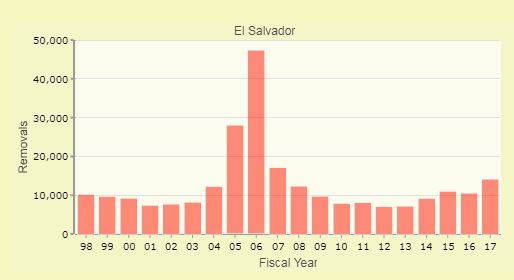 The number of pending deportation cases against Salvadorans continues to rise, hitting a total of 138,042 open cases as of September 30, 2017.  These numbers reflect the growing backlog in US immigration courts of which Salvadorans are a significant part.  Only 1180 or 0.85% of the pending cases involving Salvadorans involves an allegation of a crime other than an immigration violation.   The average time to resolve a case involving a Salvadoran is 574 days.

It's also important to recognize that the Trump administration is responsible for less than 20% of the deportation proceedings pending against Salvadorans.   The great majority were started under Obama. 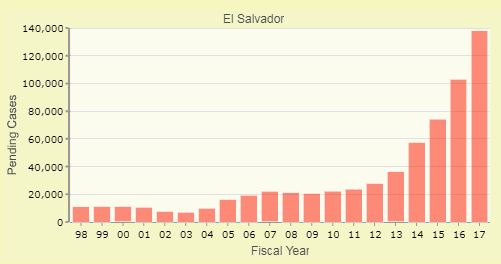 The numbers of pending cases in the US immigration courts are an advance indicator of what is to come.  Most cases in immigration court, especially where migrants are unrepresented, result in removal orders.   With 138,000 open cases and the possible elimination of TPS for 195,000 more, the reduction of deportations to El Salvador from the US seen in 2017 will not continue.