The FMLN's new candidate for mayor of San Salvador 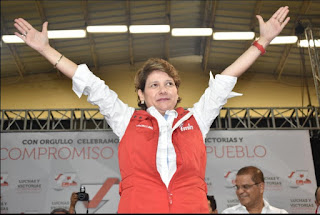 El Salvador's left wing party, the FMLN, has chosen Jackeline Rivera to be its candidate for mayor in the March 2018 elections.   The party needed to choose a new candidate after expelling from the party, Nayib Bukele, the current mayor.

Rivera is currently a deputy in the National Assembly for the department of  Cuscatlán.

Rivera shared details of her biography earlier this year in an interview at 102Nueve.com.   Rivera was born in the municipality of Cinquera, where her father was an early guerrilla leader.   She was a child soldier, joining one of the five member groups of the FMLN, the Fuerzas Populares de Liberación (FPL) in 1979 when she was only 8 years old.  At age 16 she was a radio operator for the FMLN operating in the mountains.

A photo of Rivera which appeared on the interview with 102Nueve:

After the war, Rivera studied law and became a lawyer.   Eventually she reached her current position in the National Assembly.

Rivera will be stepping into the candidacy made vacant by the FMLN's expulsion of Nayib Bukele, the independent-minded current mayor of San Salvador.  Back when Bukele was still in the party's good graces, Rivera tweeted this picture of herself with Bukele on their way to the internal elections for his nomination in June.

Rivera will have an uphill battle competing against ARENA's candidate, Ernesto Muyshondt, and working to win over voters upset by the FMLN's expulsion of the popular Bukele.
2018 elections FMLN Jackeline Rivera