October 09, 2017
The Latin American Public Opinion Project and Inter-American Dialogue have collaborated to produce a working paper titled Beneath the Violence: How Insecurity Shapes Daily Life and Emigration in Central America.

Using public opinion polling data from the Latin American Public Opinion Project, the study looks at how perceptions of crime and violence affect the routine of daily life for persons living in Central America, particularly the Northern Triangle countries of El Salvador, Guatemala and Honduras.


Insecurity, crime, and state weakness are parts of everyday life in much of Central America. Most homicides and other crimes go unreported or unsolved and law enforcement, judicial, and correctional systems are overloaded, corrupt, and ineffective. Despite decades of effort on remedies, the underlying security situation remains largely the same, if not worse, in some countries. Facing dangerous and daunting contexts, individuals modify their behaviors in ways that have personal, economic, societal, and even transnational consequences. A focus on these dynamics can reveal opportunities for strategic programming to curtail the damaging effects of crime and violence to the region.

The problem is particularly severe in the three “Northern Triangle” countries–El Salvador, Guatemala, and Honduras–which regularly rank among the most violent countries in Latin America and the world.... The reality of high homicide rates registers among the population: in the Northern Triangle, more than half the population has “some” or “a lot of fear” of being a victim of homicide, with El Salvador the most affected.

As an example, the chart below shows how people may limit their activities in order to avoid the danger of crime: 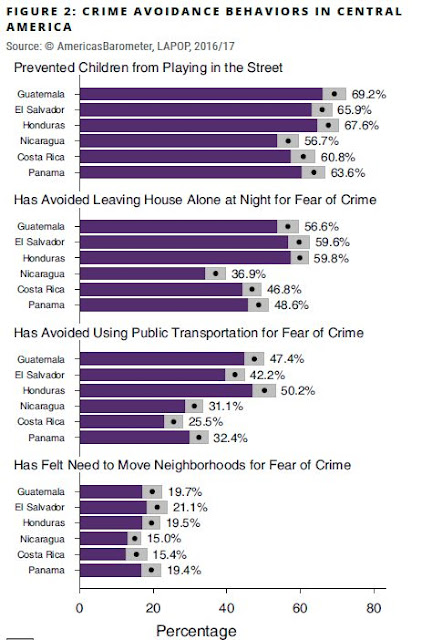 The study also reveals a (not surprising) correlation between the level of concern people exhibit about crime through their daily actions and their willingness to consider migrating as a way to escape the danger.   In other words, a perception of insecurity pushes people to emigrate.