The Use of Force Manual for police in El Salvador

.@USAID-supported Use of Force manual will guide #ElSalvador police to ensure respect for #humanrights & their own integrity in daily job pic.twitter.com/GTn7LGGvsZ
— USAID/El Salvador (@USAIDES) October 13, 2016

So I was curious, with all the concern over fatal confrontations between the gangs and El Salvador's security forces, what this Use of Force manual might contain.

It took me a Freedom of Information Act request to get a copy from USAID, but it finally arrived today.  The document is titled "A Conceptual Framework for the Use of Force and the Employment of Lethal Arms by the National Civilian Police of El Salvador" and consists of a scant 13 pages.  You can download it here.

The manual is summarized by this pyramid diagram, in which the level of force to be used is matched to the level of resistance by the subject.  It is a pretty basic concept - don't use more force than the minimum amount necessary: 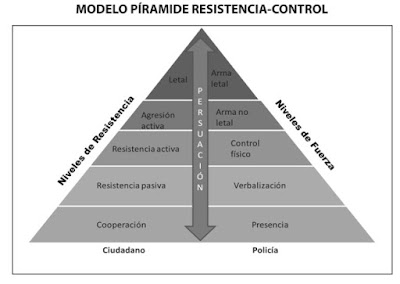 Here is an excerpt concerning the use of lethal force which I have translated from the manual:


The use of potentially lethal force constitutes an extreme measure only justified by the legitimate defense of your life or the life of third parties.   Understand that a lethal weapon is an instrument, object, means, or mechanism that can produce grave injury or death.   The firearm assigned as part of your equipment is considered part of "lethal weaponry".

The firearm should only be employed to stop a potentially lethal aggression, that is to say, in order to stop a serious attack that affects the integrity of a person.  In this way, the firearm should not be employed in demonstrations of force unless for neutralizing a dangerous aggressor in the most immediate possible way.

For this reason, it is not advisable to use a firearm in cases which are not serious, shooting into the air, at the tires of vehicles, or where peoples' lives are exposed.

I hope no one spent too much money on this manual.   I hope no one expected it to produce police officers who will have greater respect for human rights.
Human Rights PNC US relations

Unknown said…
Wow. Good work, Tim. Maybe I should tweet back a big eye-roll. Thanks again for all you do. We read everything you post, and it shapes our work and how we present it.
Michelle
ENLACE
9:18 AM