The mayor and his party 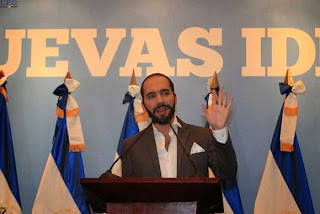 Nayib Bukele was elected mayor of San Salvador in 2015 on the ticket of the left wing FMLN.   In the campaign, as well as during his time in office, he has always kept himself at a distance from the party leadership.   His agenda as mayor has always been branded as Bukele's agenda for the city, not the party's agenda.

Such independence is sometimes tolerated, but never appreciated, within the hierarchy of the FMLN. Although Bukele will be running again on the FMLN ticket for re-election as mayor of San Salvador, it appears clear that the party will not choose him as its 2019 presidential candidate.

This week the relationship between Bukele and the FMLN hit a new low.   Bukele was unable to gather votes in the San Salvador municipal council for two of his big improvement projects in the city's historic center when FMLN council members voted against him.    Bukele went to Twitter to complain that some members of the FMLN were no different that ARENA, with the only exception being that they did not sing the ARENA hymn. 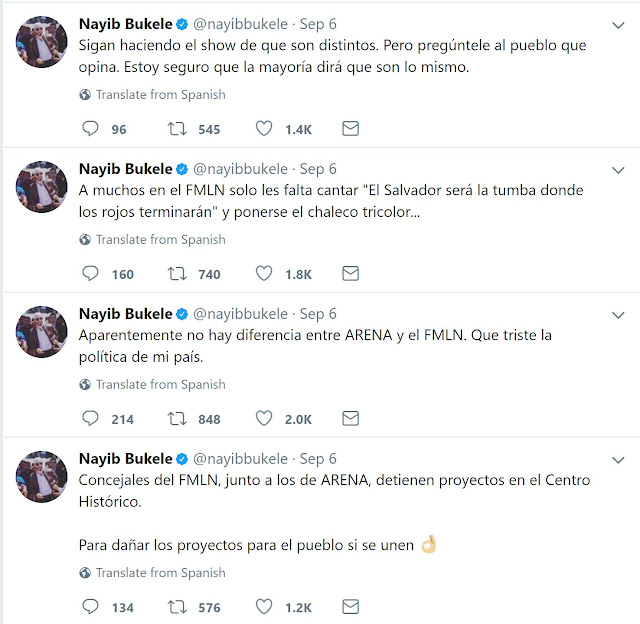 Then Bukele picked another fight, when Lorena Pena, a deputy of the FMLN in the National Assembly and former president of the legislature, tweeted that cocaine and other drugs could make people do crazy things, Bukele replied that having so much money in one's hands after never having had it, makes some forget that they were sworn to fight for the people.

Since then a counterattack has started against Bukele.  The FMLN has been condemning Bukele for allegedly having called FMLN lawyer Xochitl Marchello a "bruja" (witch) during a meeting where she was calling on him to discipline a member of the municipal government who had been repeatedly denounced for mistreating women.  Marchello has filed a complaint against Bukele with the attorney general's office, and the women's organization within the FMLN is demanding a public apology.

Bukele denies any of this happened, and released an audio recording of his interactions with Marchello in the meeting in question.   The recording does not cover the entire meeting, however, and FMLN members from the San Salvador council released a statement denying that they are attempting to thwart Bukele's agenda and affirming that the abuse of Marchello occurred in parts of the meeting not covered by Bukele's recording.

All of this fighting between the FMLN and its most popular politician comes with less than 6 months before the 2018 nation-wide elections for mayors and deputies in the National Assembly.     Right wing politicians are just sitting back and smiling.   The public continues to be disgusted with all the political parties.