August 05, 2017
The United Nations Population Fund is reminding us about the high and tragic costs of pregnancies among girls as young as 13 in El Salvador:

Pregnancy can be a dangerous time, especially for girls whose bodies are not yet mature enough for childbearing. Globally, pregnancy-related complications are the leading cause of death among girls aged 15 to 19.

Yet early motherhood is common in El Salvador. Between 2013 and 2015, one out of every three pregnancies was to an adolescent mother, according information from the Ministry of Health.... 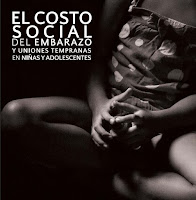 In connection with its work, the UNPF has published a new document with the testimonies of 14 child mothers from every department in El Salvador as well as commentaries from prominent workers in the area of health, social work and human rights.   The study, in Spanish, presents an intimate look at what happens to the lives of Salvadoran girls who become pregnant at a young age.

Legislation in the US Congress supported by the Trump administration would eliminate all US funding for the UN Population Fund.

Terry Bridges said…
How important do you think the lack of access to birth control and abortion are in regards to the teen pregnancy problem in El Salvador. I am so disappointed that the FMLN cannot make abortion legal and safe for all women in El Salvador.
12:03 PM

Tim said…
There are a wide variety of causes. Certainly the lack of sex education and lack of access to contraception are quite important. There is additionally the problem of a macho culture, of sexual violence against women, and a lack of empowerment of women so that they can be in control of their own bodies. I think the absolute criminalization of abortion plays a role in not having therapeutic abortions when a young girl is pregnant, but I actually do not believe there would be a large number of abortions outside of therapeutic uses given cultural and religious norms in the country.
1:58 PM