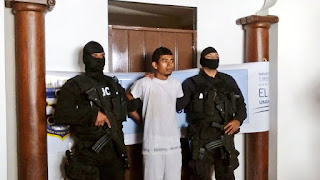 Last week researchers from the Public Opinion Institute at the University of Central America (IUDOP) and Florida International University released the results of polling concerning the perceptions of the Salvadoran public concerning the police.  The report is titled Legitimacy and Public Confidence in the Police in El Salvador.

The report surveyed persons throughout El Salvador about their interactions with police and their views of police practices.  Although many persons, especially the youth, have been subjected to abuse by police, there is still significant tolerance for such practices.  While 60% of Salvadoran believe that the police should follow the law in combating crime, 40.1% would approve the use of torture in dealing with gang leaders, 34.6% would approve extrajudicial executions and 17.2% are okay with practices of "social cleansing."

8% say they have been verbally abused by the police, 2.4% have been physically mistreated by a police officer, 3% have been the victim of police corruption and 1.2% had been subject to extortion by an agent of the police.   While those percentages may seem small, when you multiply them times a population of 6.5 million, you realize that tens of thousands of persons in El Salvador have experienced mistreatment at the hands of the police.

With respect to youth, the numbers are significantly higher.   15% of youth says they have suffered some form of mistreatment at the hand of police.

51.5% believe there is some level of corruption within the ranks of the police.

Still according to the poll, the majority of the citizens express satisfaction with the work of the police.  Yet 49.6% believe that the police represent and defend the interest of persons who are in power and 48.9% believe the police protect those who have economic resources.

You can read the executive summary or the full report at these links (in Spanish):
Executive Summary
Full report.