August 15, 2017
August 15 is the 100th anniversary of the birth of slain Salvadoran archbishop Oscar Romero.   Romero was beatified by the Roman Catholic church in 2015, and the country's faithful continue to wait expectantly for news that the church will canonize Romero and officially give him the title of saint.

Blessed Oscar Romero, the martyred Salvadoran archbishop beatified by Pope Francis in 2015, was born one hundred years ago this week (August 15) and his centennial was marked by devotees around the world. At a memorial service at St. George’s Cathedral in London on Saturday, August 12, Archbishop Vincenzo Paglia, postulator of Romero’s canonization cause, reminded over 500 attendees gathered there that they joined faithful “in El Salvador and in other parts of the world, to remember this shepherd for his Gospel witness that brings light to believers and non-believers alike.” He added that, “my great hope is that Pope Francis will soon canonize him a Saint.” Paglia told Vatican Radio that canonization may come as soon as next year. 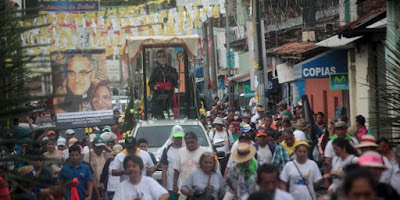 In Romero’s El Salvador, 1,500 pilgrims walked from his tomb in the San Salvador Cathedral to the highland village where Romero was born 100 years ago, some 90 miles away. Pope Francis sent Chilean Cardinal Ricardo Ezzati as his personal representative to the commemorations, publishing the letter of his commission, in which the Pope calls Romero an “illustrious pastor and witness of the gospel.” The Pontiff writes that Romero was a “defender of the Church and of human dignity,” and a herald of “the saving work” of Christ, manifested in his “love for all, especially the poor, the abandoned and the marginalized,” seeking to promote “reconciliation and peace.”

In the United States, Los Angeles Archbishop Jose Gomez celebrated a commemorative mass for Romero at Our Lady of Angels Cathedral, while Dallas Bishop Edward J. Burns is presiding at a mass at the Cathedral Shrine of the Virgin of Guadalupe, calling on all his priests to celebrate similar masses in their parishes. An independent group of Romero devotees that promoted the Romero centennial in the United States documented commemorations in various Latin American countries and in places as far-flung as Kuala Lumpur, Malaysia … [More] 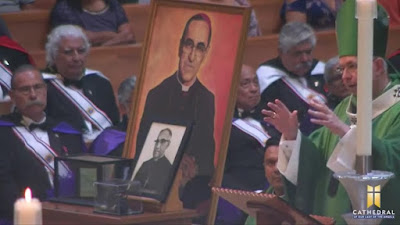 “One hundred years after his birth,” Archbishop Gomez said at the tribute at the L.A. Cathedral, “Blessed Oscar Romero still inspires us for his humility and courage — for his love for the poor and his witness of solidarity and service to others, even to the point of laying down his life.”