The media message in El Salvador

July 12, 2017
Two news stories highlighted challenges to freedom of expression in El Salvador.   One story involves a new law proposed in El Salvador's legislature.   The violence prevention bill calls on the media to "self-censor" itself to avoid violent images and promote a culture of peace.   From the Financial Times:


The government of El Salvador, led by President Sánchez Céren, has presented a bill to Congress saying the media “should contribute to the promotion of the prevention of violence, tolerance and the culture of peace . . . by seeking the ethical self-regulation of information and non-violent content”.

The Law on the National System for the Prevention of Violence immediately drew scorn from media outlets, that accused the government of seeking “control”....

The administration, however, says it is not seeking censorship.

The bill “contains no sanction on the media but simply talks of self-regulation”, the justice and security ministry tweeted after the bill was presented to the security commission of Congress.

The bill said such restraint is needed “so as not to affect the mental health of the population” but that freedom of expression, of the media and information, would not be compromised.

Local media quoted Mauricio Ramírez Landaverde, the security minister, as saying that the aim was for the media not to publish graphic scenes of violence and to "institutionalise” what the media was already doing. Media bosses will be called to address the commission on the issue. 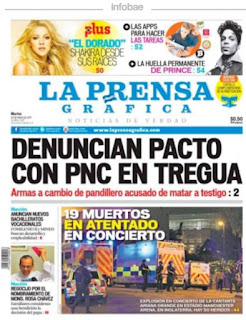 The Financial Times article suggests that the FMLN government was concerned about unfavorable coverage of its hard line tactics against crime which lead to bloody confrontations with gang members.   I think that analysis is wrong.   In fact, the government seems to promote stories about its aggressive tactics since those tactics continue to have popular appeal.    Instead, the government is upset by coverage of gang killings and other violence which make it appear (correctly) that the government does not have an effective strategy of crime prevention and control.    It is also true, however, that the conservative major media goes out of its way to portray the violence in the society in an effort to sway public opinion against the left wing government in the 2018 elections.

The second news story involves a defamation lawsuit filed by the mayor of San Salvador, Nayib Bukele, against the La Prensa Gráfica newspaper.  The InterAmerican Press Association ("IAPA") expressed concern about the lawsuits on the IAPA website:

The Inter American Press Association (IAPA) expressed its concern over multi-million dollar lawsuits filed by the mayor of San Salvador against the La Prensa Gráfica newspaper, alleging grievances caused by press investigations regarding purported irregularities committed by his office...

Matt Sanders, president of the IAPA, stated that he was surprised and concerned regarding the mayor's actions. He called upon Mayor Bukele himself, as well as the prosecutors and judges who might be involved in examining the merits of this lawsuit, to understand that elected officials are subject to greater public scrutiny in accordance with international standards on issues related to freedom of the press and of expression. He underscored the concern that the lawsuit in and of itself might constitute an act of intimidation against the named media outlets in an attempt to impose prior censorship on the work of journalists.

The lawsuits by Bukele are part of a long-running feud between LPG and the mayor.   It is a little bit hard to believe that Bukele's reputation has been damaged by the actions of LPG, since he is still the country's most popular politician.   While LPG's coverage of Bukele is unrelentingly negative, that does not mean that Bukele should resort to the courts.   Yet in El Salvador, the defamation lawsuit is a common tool to attack your opponents from the press and elsewhere.

Just a comment about the IAPA story to conclude.   Although this is an organization supposedly devoted to journalistic integrity, its story about Bukele's suit against LPG failed to mention that Jose Roberto Dutriz, the owner of LPG, is a member of the Executive Committee of the IAPA.