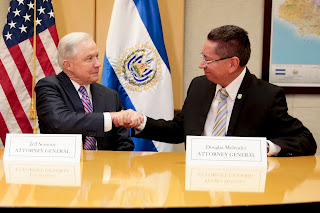 I knew something was going on when I started to read stories of a big surge in purported gang arrests in El Salvador.   Hundreds of young men were being picked up in sweeps across the country and charged with gang related crimes.    Human rights groups will tell you that when these periodic sweeps take place in El Salvador, a great number of innocent youth are detained, simply for being male and poor in a zone with gangs.

Then I learned the reasons for the sweeps.   US Attorney General Jeff Sessions was coming to El Salvador to discuss crime fighting.   The US Justice Department put the news on its web site:

News organizations like NPR, also commented that Sessions might prefer to be away from Washington and the barrage of presidential tweets aimed at him:


Attorney General Jeff Sessions is traveling to El Salvador to meet with law enforcement officials and discuss efforts to combat the MS-13 gang.  As NPR's Carrie Johnson notes, "the attorney general's travel puts some distance between himself and the toxic environment in Washington." Sessions has been brutally and repeatedly criticized by President Trump over the past few days, with the president openly questioning whether Sessions will stay in his post.

The attorney general did not take questions from the press as he boarded a plane to El Salvador on Thursday, The Associated Press reports.  The wire service has more on the trip:

Forging ahead with the tough-on-crime agenda that once endeared him to Trump, Sessions plans to meet his Salvadoran counterpart, Attorney General Douglas Melendez, before convening with other law enforcement officials on what his program calls a transnational anti-gang task force. He will tour a detention center and meet former members of MS-13, also known as Mara Salvatrucha, which Sessions has called a top threat to public safety in the U.S.

In addition to meeting with Douglas Melendez, his counterpart in El Salvador, Sessions also met with president Salvador Sanchez Ceren, and with the director of the National Civilian Police, Howard Cotto.

Trump and Sessions have been focusing on MS-13 this week as a way of justifying their harsh immigration enforcement policies.  After Sessions visit in El Salvador, Trump made a speech to law enforcement on Long Island yesterday where he repeatedly referred to criminal acts by MS-13 in the US as the reasons he wants 10,000 additional ICE agents in the US.  Trump and Sessions would like people to believe that MS-13 members are sneaking into the US as unaccompanied minors to commit murder and mayhem, when there is little evidence of that.   As Hector Silva pointed out:


But Sessions' statement also distorts the truth. Once again, there is no information that allows the attorney general or Trump's administration to affirm that these murders are attributable to the arrival of undocumented minors, who began coming to the United States in larger numbers in 2014. In fact, there is no study by federal agencies or academic institutions that proves that there is a significant number of gang members among these minors. On the contrary, a large portion of these undocumented youths who come seeking asylum claim that they are fleeing gangs in the Northern Triangle.