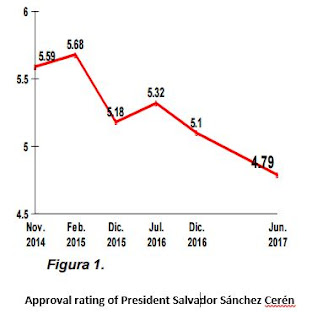 The Public Opinion Institute at the University of Central America (IUDOP) released a public opinion poll Tuesday concerning Salvadorans' views of their government and the political parties.

The results for president Salvador Sánchez Cerén of the FMLN were not good.    His job approval rating on a scale of 1-10 has fallen to 4.79, the lowest of the past five presidents at the same point in their terms in office.  The results show a Salvadoran public who are very unhappy with the current administration:


As a consequence, 63.4% of those polled believe that the left-wing FMLN should not continue in power governing the country.  But the leading party of the right, ARENA, should not jump for joy at these results:  an even greater percentage, 68.1%, indicated that ARENA should not return to power.   Similarly, 75% believe that FMLN governments are corrupt, but 87% believe that ARENA governments have been corrupt.

Seems the Salvadoran People have given El Salvador's overall political system a thumbs down vote...and in disgust.

So much potential and so much blood spilled - and neither Party can get it right - "see the new boss...same as the old boss" certainly holds true here.