The PDDH and forced displacement

May 15, 2017
Last month I wrote about how El Salvador's government refuses to acknowledge the reality of people being internally displaced within the country as a result of violence.   This denial comes despite ongoing media coverage and reports of NGOs and others. 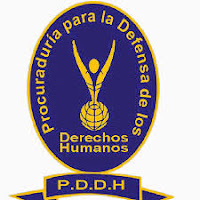 One part of El Salvador's government, however, is acknowledging, and urging attention to, the problem of forced displacement.   That is the Human Rights Ombudsman's Office (PDDH for its initials in Spanish.     The attention of this office started with a Report dated July 28, 2016 under the previous PDDH, David Morales.    The appointment of new PDDF, Raquel de Guevara, did not change this focus.   This was first seen in her Pronouncement on October 3, 2016 which focused on the case of Caluco, an entire community which had been displaced.  In that pronouncement the PDDH called for the Salvadoran government to recognize its responsibilities to displaced populations under norms established by the United Nations and to take concrete actions to avoid the exodus of people from their homes.

This commitment of the PDDH continues as seen in a workshop the PDDH had with the UN High Commission on Refugees last week to develop an action plan on forced displacement.

The PDDH in El Salvador does not have any power over any other elements of the government.    She has only a moral voice and a public platform to report on where the government falls short in its adherence to human rights.   Hopefully someone will eventually listen.