Jesuits petition for release of one of the assassins

May 31, 2017
Jesuits at the University of Central America petitioned this week for the release of former Col. Guillermo Benavides, who had been returned to prison after the 1993 amnesty law was nullified last year.  From the AP:

Benavides and a lieutenant, both members of an elite, U.S.-trained battalion, were convicted in the killings but then freed under a 1993 amnesty decree covering crimes during the Central American nation’s civil war. The Supreme Court declared the amnesty unconstitutional in 2016, and Benavides returned to prison despite appeals from his lawyers.

“We are aware of his regret and his admission of the error,” Tojeira said, adding that the 74-year-old ex-soldier “no longer represents a danger to the Salvadoran people.”

Tojeira also said the Jesuits believe Benavides is a “scapegoat” for those who ordered the massacre and were never punished. The Jesuits consider the case against the killers closed but continue to seek clarity on the intellectual authors of the crime.

The Jesuits have been consistent in their search for complete justice in El Salvador, and in their position that the conviction of two lower level officers for a crime plotted, ordered, and covered-up at the highest levels of the military command, was not just unless accompanied by prosecution of their superiors. 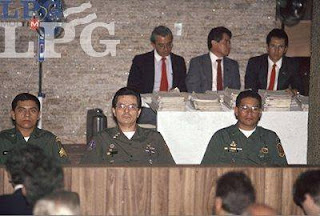 Image from 1991 trial of junior officers