May 04, 2017
El Salvador is worried about a possible increase in deportations of gang members from the US and its impact on levels of gang activity in the Cental American country.    With president Donald Trump promising to deport lots of "bad dudes," law enforcement authorities are trying to make plans.


El Salvador proposed new measures on Wednesday to track criminal deportees from the United States as part of a bid to keep violent street gangs known as "Maras" from expanding as U.S. President Donald Trump vows to kick them out.

Salvadoran Vice President Oscar Ortiz said the government wants to create a database of criminal deportees overseen by police to make sure they do not join gangs after returning.

Ortiz said that deportees with criminal records would be classified according to the crime for which they were deported and may be forced by court order to appear before the police every month.

"The measure seeks to ensure that they are not engaged in illegal activities. That's to say, they should be making an effort to reinsert themselves into society, to build a normal life with their family," Ortiz told journalists.

El Salvador's attorney general Douglas Meléndez told the security commission of the National Assembly that investigations had revealed that gangs in El Salvador were forming new cliques (cells) around gang members deported from the US.   The cliques, which have names based on US cities, were directly receiving orders from the US. 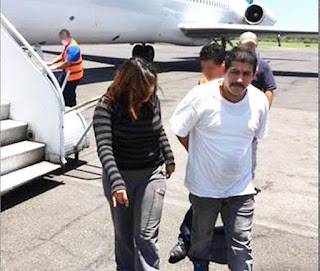 Meléndez revealed that he, along with other attorneys general in Central America, were working with US Attorney General Jeff Sessions on the issues of gang activity.   El Salvador would also like to receive more information from the US about the reasons people are being deported including what types of crimes, if any, they had committeed in the US.

The rhetoric from the Trump administration about 'bad dudes" and MS-13 has clearly gotten the attention of the Salvadoran government.    Yet it is not at all clear that we will see a change in the number of gang members being deported back to El Salvador.    The Obama administration also prioritized enforcement activities and deportation of persons who committed violent crimes.    While it seems clear that under Trump more Salvadorans will be deported, it is not at all clear that more gang members will be deported than in earlier years.
Gangs Migration US relations