April 24, 2017
The street gang Mara Salvatrucha or MS-13 is US president Donald Trump's rhetorical ISIS for the Americas.   Trump uses the spectre of MS-13 gang violence to generate fear of every migrant from a region just as he uses the spectre of ISIS to generate fear of Muslims and migrants from the Middle East.  Trump and his attorney general Jeff Sessions have frequently referred to the Central American gang as the reason the US must build a southern border wall and must increase immigration enforcement and deportations. 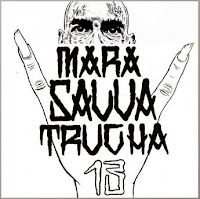 
Attorney General Jeff Sessions vowed Tuesday to "devastate" the Central American gang MS-13, calling the group "one of the most violent gangs in the history of our country, no doubt about it."

Sessions spoke to Fox News' "Tucker Carlson Tonight" hours after President Trump blamed what he called "the weak illegal immigration polices" of the Obama administration for allowing MS-13 to spread to cities across the U.S.

Sessions told host Tucker Carlson that he had "no doubt" that Obama's policies led to the group's growth, saying "so many of these people are illegally here, and they came without proper authority. And with a good, lawful border, many of them would not be here."

The attorney general said that law enforcement had made progress against MS-13 until Obama took office, but "they've come back aggressively in recent years."

Sessions added that under the last administration, gang members "were directed how to enter, if they came, and claim themselves as a minor and the Obama administration let them come in the country and took them to their destination city and turned them over to some relative that claimed to be a relative."

According to Sessions, MS-13 "could qualify" as a terrorist group due to the violence of its members.

"They use machetes, they kill children, they put children into prostitution at age 12 ... They’re involved in the kinds of activities that can be identified and they can be prosecuted," Sessions said. "I believe if we stay at it, we can devastate this organization and that’s going to be our goal."

As with refugees from the Middle East where Trump uses the violence committed by ISIS and other extremist terrorist groups to justify his Muslim ban, Trump and Sessions use MS-13 to justify banning refugees fleeing from the violence caused by MS-13 and other Central American gangs.  Trump's executive orders with the Muslim ban (currently blocked by two federal courts) block not only refugees from the Middle East for a period of time but also block the reception of refugees from Central America.

And as with ISIS, Trump and Sessions' references to MS-13 are filled with facts and inaccuracies.    Héctor Silva Ávalos does a good job in detailing those inaccuracies in an article at InsightCrime titled 7 Things the Trump Administration Gets Wrong about MS13.   It is an unfortunate direction of US policy, using fake news and fear-mongering to generate support for xenophobic laws.
Migration US relations