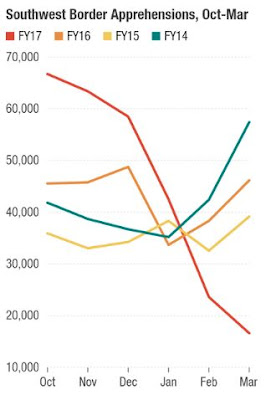 Apprehensions of undocumented migrants at the southwest US border have dropped dramatically since president Trump has taken office.  Apprehensions have dropped from 58,000 in December to 43,000 in January, 24,000 in February and 17,000 in March.

Within the drop in migrants noted above, there has been an even greater drop of 93% in the numbers of mothers with children being apprehended.  A Reuters story today titled Separate mothers and children: How a Trump threat deterred illegal migrants, argues that it is Trump's threats and tough talk about how he will handle families crossing the border, more than any actual policy actions, which have deterred migrants from making the dangerous journey north. According to Reuters:

The policies targeting women and children have their roots in a working group consisting of Capitol Hill staffers and others called together by Trump’s transition team in the weeks after the Nov. 8 election.

The group was asked to develop policies to discourage illegal border crossings and more quickly expel illegal immigrants after they crossed the border, according to two of the DHS officials and a congressional aide.

One goal was to help Trump fulfill a major campaign promise: ending so-called “catch and release,” the practice of apprehending illegal immigrants but then freeing them to live in the United States while their asylum or deportation cases were resolved. ...

Soon, they had the bare bones of a plan: Since the court ruling on children was an obstacle to prolonged detention, why not separate them from their mothers, sending children into foster care or protective federal custody while their mothers remained in detention centers, the two DHS officials and congressional aide said.

The group also advocated two other policies directly affecting mothers and children: raising the bar for asylum and prosecuting parents as human traffickers if they hired human smugglers.

The thinking was that “if they can just implement tough policies for eight weeks - or even threaten to do that - they would see the numbers of families crossing just plummet,” said one DHS official familiar with the planning.

And although the administration never followed through with separating mothers and children, the threat, along with other tough talk from the administration, may have been enough, at least for now, to discourage thousands of potential migrants.

Certainly in El Salvador, every word out of the Trump administration regarding migrants is scrutinized and reported on.   I can see how the threats and rhetoric are changing the calculations of migrants.   And frankly, it is a good thing if fewer people are trying to migrate.   What is not good is that the violence and desperation, which forces many to flee for their lives, is not being solved,  and even the tiny official refugee program once supported by the US is being suspended.