April 27, 2017
The fact that there is an enormous backlog in US immigration courts is well known.   The backlog has prompted the Trump administration to promise to hire many new immigration judges and to speed up the process.

What is less well known is that Salvadorans make up an increasingly large percentage of the open cases in immigration court.  Using data through March 2017 from the TRAC database at Syracuse University, there were a total of 572,608 open deportation proceedings in immigration court and 123,036 of these cases involved Salvadorans (21.5%).   Only Mexico had more of its nationals in deportation proceedings with 128,659.

This chart shows the growth of open US Immigration Court cases involving Salvadorans over time: 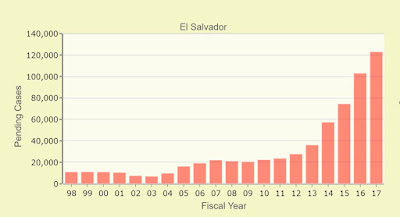 This bubble, which coincides with the flow of unaccompanied minors and mothers with children from 2014 forward, points to a very large number of Salvadorans who are already in the pipeline to be deported in the coming months and years, even without any more round-ups or enforcement actions by the Trump administration.    If Trump follows up on his promise to detain even more persons without documents or who have criminal offenses making them deportable, this number will only increase.

El Salvador is not ready to receive them.