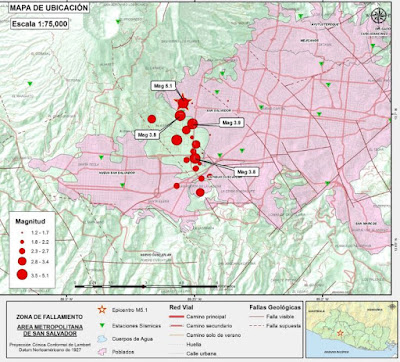 A swarm of small earthquakes has hit the greater San Salvador area in the past 48 hours causing nervousness among the population.   The Civil Protection agency has issued a yellow alert at a national level in order to facilitate inter-agency cooperation.  Authorities have urged calm and stressed that the series of quakes does not make a major earthquake more or less likely.   The population was urged to review its earthquake readiness, just as residents should be prepared at all times in earthquake prone El Salvador.

The Ministry of the Environment (MARN) warns that the seismic swarm could last a number of days or even weeks.

Through 8:45PM San Salvador time on Monday there had been 147 quakes of which the largest measured 5.1 on the richter scale.   MARN explains that this seismic swarm is a product of one of the active faults which run through El Salvador.   This particular fault runs just south of the capital city.

The quakes have resulted in one death.   A quake apparently triggered a landslide into the Pan-american highway at Los Chorros, killing the driver of one vehicle.   The highway will remain closed on Tuesday while authorities inspect for additional danger.

There has been minor damage in several areas, such as products falling off store shelves and cracks in building walls, as these photos from EDH and from LaPagina show.

MARN reported that there was no connection to the San Salvador volcano and no indication of volcanic activity.

Seismic swarms are not uncommon in El Salvador, although a swarm in the metropolitan areas has not occurred in recent years.