Bukele will seek reelection in 2018 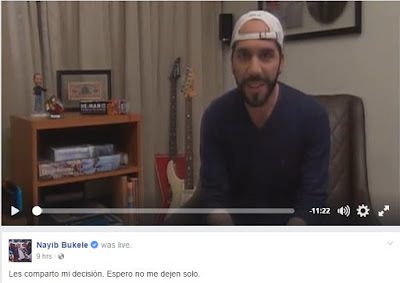 Yesterday Nayib Bukele used the medium of Facebook Live to announce that he would seek reelection as mayor of San Salvador as a candidate for the FMLN.    Wearing a baseball cap backwards on his head, seated in his home office with two electric guitars leaning on the wall behind him, Bukele explained the factors he had to weigh before deciding to run for mayor.   Claiming that he had only made up his mind to run on Sunday, Bukele stated that he could not walk away and allow ARENA to undo what he had accomplished in the capital city.    The FMLN has already stated that it will back Bukele for a second term, despite the independent track which Bukele keeps apart from his party.

You can watch his announcement here.

Currently the leading candidate from ARENA appears to be Norman Quijano.   Quijano was the mayor of San Salvador from 2012-2015, and unsuccessfully ran for president in 2014 against Salvador Sanchez Ceren.

As of Monday morning, Bukele's announcement video had already been viewed 375 thousand times.