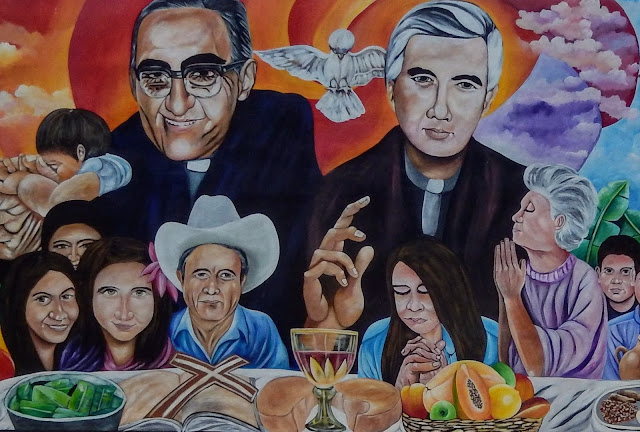 Sunday, March 12, is the 40th anniversary of the martyrdom of Father Rutilio Grande, S.J.   Grande was a Jesuit priest working with poor campesinos in the countryside near El Paisnal, El Salvador. On March 12, 1977, while driving on the road between El Paisnal and Aguilares, assassins from Salvadoran security forces killed Father Grande, as well as two of his campesino parishioners, Manuel Solorzano, 72, and Nelson Rutilio Lemus, 16. Rutilio Grande was a friend of Archbishop Oscar Romero, and this killing is said to have been one of the key events leading Romero to align his ministry with the cause of the poor and oppressed in El Salvador.

Today in El Salvador, there is hope that Rutilio will follow Oscar Romero towards sainthood. America magazine published an article this week titled El Salvador holds hope for its saint in waiting, Jesuit Father Rutilio Grande, including a description of the Salvadoran Jesuit priest's ministry to the poor:

Father Grande, a Salvadoran from the countryside, was educated mostly in Spain and Belgium and other parts of Latin America, but returned to work among his country's poor and rural masses. The mission teams he organized taught peasants to read using the Bible, but also helped the rural masses organize as workers to speak against a rich and powerful minority that paid them meager salaries and against the social maladies that befell them just because they were poor.

Jesuit Father Salvador Carranza worked with the team of missionaries Father Grande organized, which included Jesuit priests and lay ministers. They evangelized a wide rural area in El Salvador from 1972 until Father Grande's assassination, forming small communities that would read and discuss the Bible and subsequently other goings-on in their lives.

"Gathering as a community helped them grow tremendously," Father Carranza said in an interview with Catholic News Service. It started slowly. They began fixing a person's home, a street, and then they organized a food co-op that helped those who didn't have enough to eat, Father Carranza said.

"He always told the community," Perla said, that "he didn't want to bring the church to them, he wanted them to become the church."

The following words of Rutilio are as relevant today as they were in El Salvador of the 1970s:

It was this kind of "subversive" thinking which would turn Rutilio Grande into a martyr, the first of many priests in El Salvador who would be murdered in El Salvador's bloody civil conflict. On March 12, 1977, Salvadoran security forces ambushed and killed the beloved priest on his way to say mass in El Paisnal.

The online periodical ContraPunto published an interview in 2015 with Julio Sánchez, a member of El Salvador's National Guard, who admitted to his participation in the 1977 assassination of Father Grande  Here is an English translation of a short portion of the interview:


What happened on March 12, 1977, when they ambushed the Father Rutilio Grande?

Read the rest (in Spanish) here.

On Saturday, March 11, Rutilio Grande is being remembered in a memorial concert in the National Theater in central San Salvador.   On Sunday, the 40th anniversary, hundreds will march from the site of the murder on the road from Aguilares, to El Paisnal where Rutilio Grande will be celebrated with  a mass and with cultural events.