Oscar Romero -- 37 years after his assassination 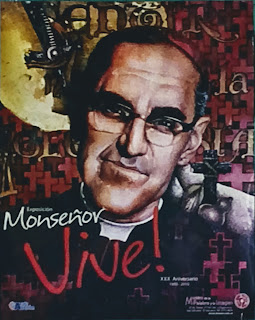 Today, March 24, is the 37th anniversary of the assassination/martyrdom of archbishop Oscar Romero.

In El Salvador,  Romero news of the past week has focused on whether or not Romero will be canonized soon by the Roman Catholic church.   The country's Roman Catholic bishops are in Rome where they expressed their interest in a prompt canonization with a trip to El Salvador by Pope Francis, as well as the beatification of Rutilio Grande.   The Pope's response? -- everything will happen on the appropriate schedule.

Yesterday, human rights lawyers filed a petition with a court in San Salvador to reopen the case of Romero's assassination.   They are asking the court, now that the 1993 Amnesty Law has been nullified, to proceed judicially to establish the facts and the responsible parties surrounding El Salvador's most notorious murder.

This year is the 100th anniversary of Oscar Romero's birth.   If you want to learn more about this towering figure of faith, justice and human rights,  I listed some of the best resources in this February 2015 post.
Catholic church Impunity Oscar Romero