March 06, 2017
On February 26, I wrote about the ongoing fight to prohibit gold mining in El Salvador.     Joining the struggle to get a law passed to prohibit all metallic mining are the Roman Catholic church, the University of Central America, the Human Rights Advocate (PDDH), local municipalities and a host of national and international environmental organizations.

I also wrote that "Oceana Gold will continue to struggle to salvage the earlier investments its subsidiary Pac-Rim made in the country."   An example of how Oceana Gold is trying to get permission to mine gold in the country can be seen in the full page ad it took out in today's La Prensa Grafica: 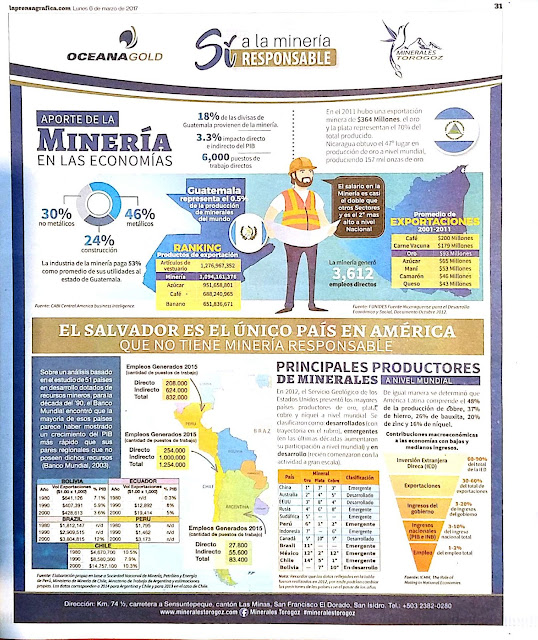 Withe the slogan "Yes" to Responsible Mining, the ad contains a variety of facts and graphics to support Oceana Gold's assertion that "El Salvador is the only country in the Americas that does not have responsible mining."

We are now 12 months away from the next election for legislators in the National Assembly.   The possible actions by Oceana Gold to try to influence the election of sympathetic deputies will bear watching.