March 21, 2017
The mother spoke in a quiet voice in the small office of the human rights lawyer.  She told the story of her daughter's disappearance.  Her daughter had gotten in a pick-up for the ride to the highway and the bus which would take her home.   Three hours later, the girl had not arrived.   Calls to her cell phone went unanswered.   The mother was told that the pick-up had been stopped and her daughter removed.    That was all she knew.

The daughter in this family is one of at least 3859 persons "disappeared" or missing in El Salvador during 2016.   That's a total of more than ten disappearances per day according to statistics reported by the country's attorney general Douglas Meléndez in a report to the National Assembly.   So far in 2017, there have been reports of 650 disappearances.   Meléndez also indicated there were probably more cases than these totals. These are just the reported cases. They are situations of unimaginable pain for the families.

Everyone seems to acknowledge that the vast majority of these cases relate to gang activity.  Meléndez did say that some of the cases could be common crime, or run-aways, or people leaving to migrate north without notifying anyone.   Other cases can be the result of disappearances caused by the security forces, or caused by vigilante death squads.    Because of a lack of investigation, however, no one really knows the break down.

El Diario de Hoy requested and received statistics from both the police and the attorney general.   Almost twice as many disappearances are being reported to the attorney general.  I am not sure of the reason for the disparity, but a criminologist quoted in the EDH report said this was the result of a lack of confidence in the police.  Both sets of statistics show the number of disappearances increasing every year from 2010 through 2014 and then declining in 2015 and 2016: 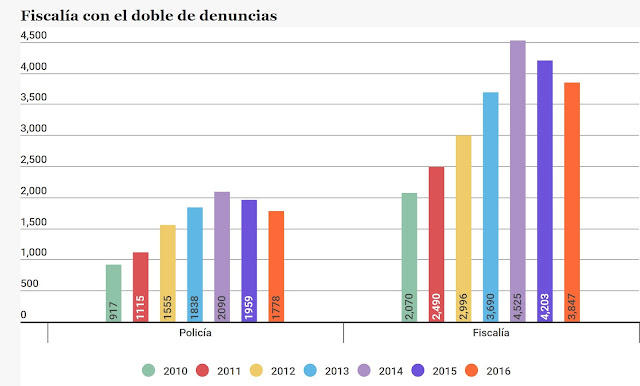 The police reported to EDH, that of the 11,252 disappearance cases reported to the police in the past 10 years, they had located only 1445 persons.   The police do not keep data on whether the persons were found alive or dead.

The question of disappearances has been one of significant political jockeying since the 2012 gang truce.    When murder rates fell by more than 50% during the truce, skeptics and opponents of the government asserted that disappearances had increased and that the decline in the murder rate simply meant that the police were not finding the bodies.    As murder rates decline with the "exceptional measures" put in place in March 2016, we can expect to see the same arguments being made.   The statistics reported yesterday do show the rate of disappearances declining, but not as quickly as the homicide rate.

The numbers of the missing are alarming, and they are rarely reported.    Compounding the situation, these cases get little attention from the government.    There is scarcely any support for the families with missing relatives.   The cases seem to have low priority for investigation and prosecution.

The missing and their families need advocates.