The left wing FMLN controls the executive branch in El Salvador and has 31 seats in the 84 seat National Assembly.   For the past two years, the party has been vocally complaining that the Constitutional Chamber of the Supreme Court is acting as the tool of right wing and business interests to thwart the FMLN's agenda.    The latest complaint surrounds a Constitutional Chamber decision which removed Jesús Ulises Rivas Sánchez, a magistrate nominated by the FMLN, from the Supreme Electoral Tribunal  ("TSE" for its initials in Spanish).

To understand the dispute, you need to understand that each of the three parties which obtained the most votes in the last round of elections gets to nominate one candidate to the TSE, whose nominations are confirmed by the National Assembly.

The Constitutional Chamber removed Rivas Sánchez for a lack of public impartiality as an officer of the country's tribunal which oversees the entire election process.  From the court's decision: 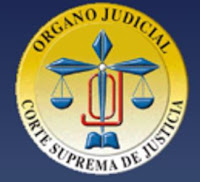 The risk to the independence and the impartiality of the TSE is aggravated more when the magistrate Rivas Sánchez continues maintaining, in a public and noticeable manner, the support that in his moment he gave to the presidential ticket proposed by a political party, being obvious, in that way, the immediate risk of causing a prejudice to the objectivity and transparency of the electoral processes under way; all of which justifies, even more, the adoption of an injunction.   In effect, keeping in place, in the decision-making body that must act as independent and impartial arbiter of the electoral processes,  a person who makes repeated public manifestations of support to a political party, can affect the objectivity that sustains the indispensable confidence of the citizens in this important organ of the State.

Rivas Sánchez's argument in response is that he is not, and has never been, an FMLN party member. He argues, that like all citizens of the country, he should have the right to make up his own mind about which party he favors.  He goes on to argue that he should also have the right to express his preferences publicly.  Rivas Sánchez correctly notes that a prohibition of expressing support for someone running for office does not appear in either El Salvador's constitution or in the country's electoral code.   This requirement has been imposed by the Constitutional Chamber, starting with a ruling in 2014 which removed Eugenio Chicas from the TSE.   (Chicas is now the spokesperson for president Salvador Sanchez Ceren in the FMLN government).   Rivas Sánchez argues that his rights to free expression and political expression are being violated by the Constitutional Chamber.

The decision of the Constitutional Chamber is consistent with one regular theme in its decisions.    The court has consistently acted to diminish the power of the political parties.   It has done so in decisions which allow independent candidates, in decision which allow voting for individual candidates rather than a party ticket, and in decisions which allow voting for candidates from different parties on the same ballot.    The decision to remove a magistrate for publicly expressing partiality for a political party follows the same track.

The FMLN issued a statement and has been vigorously complaining in public forums about the decision of the Constitutional Chamber.   The statements go beyond disagreeing with the logic of the court's decision.   The statements assert that this ruling is a blow against democracy and a conspiracy with the oligarchy and its political allies so that the upcoming elections in 2018 and 2019 can be stolen through fraud.  The statement calls on the Salvadoran people to block the efforts of the magistrates of the Constitutional Chamber to dismantle the fundamentals of democracy in El Salvador.   (You can read an English language version of these arguments from CISPES at this link)

I can understand both sides of the legal argument which were advanced in the Rivas Sánchez case, and both arguments were reasonable.   The important point should be that the Constitutional Chamber should be the body which makes the decision as to which argument prevails.   Having done that, the threat to El Salvador's democracy is not from the court decision, but from politicians who would actively seek to undermine the judicial branch of the government.