The historic center of San Salvador is the location of many important historic and cultural sites including the Metropolitan Cathedral with the crypt of Blessed Oscar Romero, the former National Palace, the National Theater, Plaza Libertad, Plaza Gerardo Barrios, El Rosario Church, the National Library, the Museum of the Central Reserve Bank and more.  The historic center is also the location of a huge sprawling formal and informal market which spills out of market buildings and onto the streets and sidewalks for many blocks.   Finally, the historic center has been a place where El Salvador's street gangs are deeply entrenched and where extortion demands backed up with threats of deadly violence predominate.

Restoring the historic center has been one of the focal points of San Salvador mayor Nayib Bukele's time in office.   Currently the city government is remodeling the two most important plazas in the sector, Plaza Libertad and Plaza Gerardo Barrios, seeking to make them visitor friendly and secure.

Bukele has also worked to relocate some of the informal vendors in the sector who clog the streets and sidewalks.  The construction of a new metropolitan market is intended to give vendors and their customers a safe and clean environment, although the first market is not nearly large enough to make much of a dent in the thousands of vendors who take their posts in the city center.

In an effort to reduce violence in the city's center, in June the national government also made a significant deployment of military troops to the area to work with the National Civilian Police.  Heavily armed soldiers can be seen throughout the zone these days.

In the context of all this work by the city government under Bukele, comes last week's mid-day shoot-out which killed six.  According to news reports, gang members came into the market areas on Wednesday and killed one of the private security guards (vigilantes)  who work in the zone.    In reprisal for the killing, fellow security guards banded together and went searching for the gang members responsible. When the killing stopped, five gang members had been killed in different parts of the city's center in addition to the original slaying of a security guard.

The shootout comes at a bad time for mayor Bukele.  The FMLN has just announced that it will back Bukele for another term as mayor in the 2018 elections (although Bukele has not announced that he will run).   Bukele is regularly mentioned as a 2019 candidate for president, although El Faro reports that the FMLN will choose its chief Medardo Gonzalez as its candidate, and Bukele said in an interview that he would need to compromise too many principles in order to run as the FMLN's candidate for president.    At the same time, La Prensa Grafica, one of the country's major newspapers which has an ongoing bitter feud with Bukele, has been running articles highlighting perceptions of danger in the historic center.

Bukele complained about the coverage in a tweet, pointing out that prior to Wednesday there had not been a single murder this year in the historic center of San Salvador. 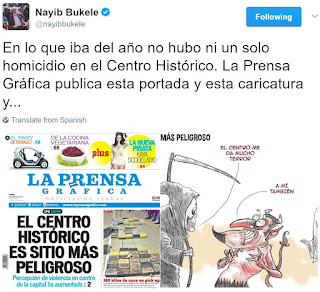 Bukele has also been pointing to an overall reduction of 60% in the crime rate in the zone.

The day of the shoot-out, supporters in the Bukele camp suggested that the violence could have been instigated by the conservative media or political forces who want to denigrate progress made in the city center and who want to damage Bukele's prospects.    While I doubt that the shoot-outs were politically sponsored, there is no doubt that the spin which major media sources put on these events has a political slant.

After the shootout, Bukele announced that the municipal police (CAM) would support the efforts of the PNC in bringing security to the zone.  A group of vendors in the zone, however, denounced the presence of CAM officers, claiming that they abused and stole from the vendors in the zone.   The vendors want security to continue to be provided by private security guards hired by the vendors association.  On Sunday, Bukele demonstrated his considerable political skills in calling a meeting with representatives of the vendors within the National Palace, where they reached an accord on security measures.

The status of the historic center of San Salvador is of great practical, symbolic and psychological importance for the country.    Hundreds of thousands of people work or travel through its streets on a weekly basis.   Major historical events occurred there.   The country's beloved Oscar Romero is entombed there.   The efforts of Nayib Bukele to restore the city's heart and to restore a sense of civic pride are significant, and the country's press should wish him well, rather than continuing to demonize the historic center and those who live and work there.