Driving in north central El Salvador this weekend as I have often done, I was struck by a changing landscape.   In many more locations than before, sugar cane was being grown and harvested.  Where once corn stalks had stood or cows were grazing, the tall stalks of of sugar cane dominated.

This is the time of year of the sugar cane harvest.    The smoke of cane fields being burned can be seen every day.    We live on the southern side of the capital city of San Salvador, and the black ash regularly floats through open windows and doors.    Massive cane trucks fills the highways carrying the harvested cane stalks to the country's sugar mills.

Statistics from El Salvador's Ministry of Agriculture confirmed my impressions that sugar cane production has expanded signficantly in El Salvador in recent years.   According to numbers from the Ministry, the amount of land dedicated to sugar cane production increased by 33% between 2010 and 2015.  Additional growth was fueled by a 2015 contract with China, and now China is the largest purchaser of Salvadoran sugar.    Since tiny El Salvador is not getting any bigger, the large increase in acres of sugar cane means that other crops are being displaced by the sugar cultivation. 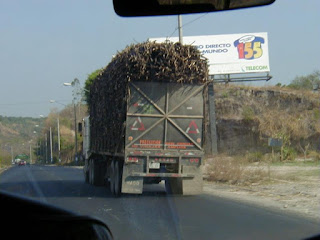 The increase in sugar cane fields raises significant concerns about the adverse effects of cane production on the country's overall food security.   As food crops are displaced for exportable sugar, El Salvador becomes less and less able to feed itself.   Sugar cultivation is very hard on the soil and growing the crop involves intensive use of chemical pesticides and fertilizers.    Working conditions are harsh, and the low paid workers in the sugar cane industry suffer high rates of illness and injury.

These adverse effects of sugar cane production were well documented in a 2016 report from Voices on the Border titled Large Scale Sugar Cane Production in El Salvador.    I strongly recommend anyone not familiar with the sugar industry and with its adverse effects to read this thorough report.

The report concludes with a series of recommendations:


1. The Government of El Salvador must begin enforcing its environmental laws.

2. The Legislative Assembly should pass and the President sign into law the General Water Law as proposed by civil society organizations in 2006, along with the 2014 ban on agrochemicals, and the constitutional amendment on food security.

3. The Salvadoran government should enact more policies that benefit small farmers and local markets. These include protecting vegetable and grain markets with import tariffs like they do for sugarcane growers, and helping more rural communities create weekly farmer’s markets. The government should also launch a nutrition campaign that focuses on eating locally produced goods.

5. Launch a campaign in rural communities about the impacts of large-scale agriculture, and assist them in developing food security plans that are based on local production for local consumption.

6. Create a movement of communities affected by large-scale sugarcane to advocate for the rights of the people and proper regulation of the industry.