The mayor and the newspaper 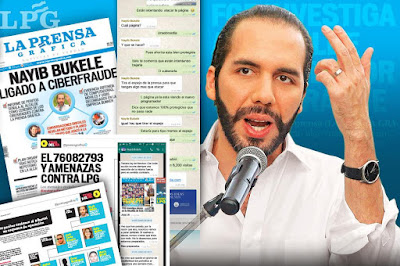 For more than a year now, there has been a very public war between the mayor of San Salvador, Nayib Bukele, and one of El Salvador's major newspapers, La Prensa Grafica (LPG).   The dispute relates to a "cyber-attack" on the LPG website in the summer of 2015 in which a cloned version of the site was created, to mislead web-surfers with a fake version of the site.

LPG claims that Nayib Bukele was the person who ordered the cyber-attacks against the newspaper. LPG coverage of its claim has been continuous over the past year.    LPG claims the attacks were in retribution for articles in the paper critical of the mayor.

For his part, Bukele recently compared the ongoing published attacks from La Prensa Grafica to a cancer, calling the allegations an invention of the Dutriz family, owners of LPG.

Now a year after the initial arrest, according to ContraPunto, the attorney general says the investigation is still open and that his office would not be commenting on links to any specific persons including Bukele.   The attacks have gotten personal as LPG went after Bukele's wife claiming that Bukele had put her on the municipal payroll, to which Bukele responded that Jose Roberto Dutriz was a greedy man who was acting out of spite because Bukele wanted the Dutriz family to pay its taxes,

I have no idea where the truth lies on this issue. There is little doubt in my mind that Bukele has a well-oiled cyber-machine polishing his image and political fortunes.  On the times when I have blogged or tweeted about the mayor, I have seen dramatic jumps in retweets and sharing of my posts.   El Faro journalist Roberto Valencia has commented on the same phenomenon.

But an effective cyber-strategy does not mean that Bukele is (or is not) behind the cloning of the LPG newspaper site.   And, as far as I can tell, the fury of LPG has done nothing to diminish the popularity of the capital city's mayor.