October 30, 2016
Former president of El Salvador Antonio (Tony) Saca was arrested on corruption charges in the early hours of Sunday morning as he left the celebration of his son's wedding.  Along with Saca, police arrested Julio Rank, Saca's ex-secretary of Comunications,  César Funes, the ex-president of the ANDA water authority, and Elmer Charlaix, Saca's former private secretary, and three other officials involved in managing funds in the office of the president. 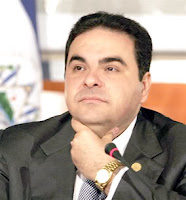 
In March, El Salvador's supreme court ordered a civil trial of the former president, as well as his wife, Ana Ligia de Saca, because he could not explain how he acquired $5 million at the end of his term.

Saca, who also had his bank accounts and properties frozen, was expelled from his political party, the conservative Nationalist Republican Party (Arena), in 2009 due to the alleged irregularities.

In February, former president Mauricio Funes was also ordered to stand trial for more than $700,000 that he was not able to account for following his 2009-2014 term.
Funes, a former TV journalist, was leader of the leftist political party Farabundo Marti National Liberation Front.

In January, another ex-president of El Salvador and Arena leader, Francisco Flores, died after suffering a stroke as he waited to face trial over embezzlement charges.

Saca and the others are accused of misappropriation of government funds, conspiracy and money laundering.   Recent reports connected to the legal proceedings against Elmer Charlaix, Saca's private secretary, have shown a flow of $18 million out of accounts of the presidency of El Salvador into personal accounts belonging to Charlaix and then to personal accounts of the former president and others.

Tony Saca was elected president as a member of the ARENA party in 2004 and served from 2004-2009.  Following his time in office, he had a falling-out with ARENA which expelled him in December 2009.  He then became a leading figure in the GANA party, and ran again for presidency in 2014.

This corruption prosecution of Saca certainly could have proceeded many years ago if there had been any courage to do so in the attorney general's office.    As I wrote in 2009 in a post titled Tony Saca - good riddance,  El Diario de Hoy published an investigative report revealing that Saca's presidential office spent $219 million more than was budgeted by the National Assembly. The spending by the presidency was out of proportion to all other sectors of the Salvadoran government -- Saca's spending on goods and services was greater than the spending of the ministries of health and education combined. While the ministry of health was running out of money for medicines in the hospitals, Saca spent $83 million on publicity for his presidency.   His businesses had 10 times more profits when he left the presidency than when he started, and an enormous mansion on the slopes of the San Salvador volcano became his post-presidency home.

New attorney general Dougleas Melendez has shown a willingness to bring the high profile public corruption cases.   The Saca case is the highest profile case yet, and will test the ability of El Salvador's justice system to deal with the rich and powerful.