A Salvadoran Cross for the Lutheran-Catholic commemoration of the Reformation 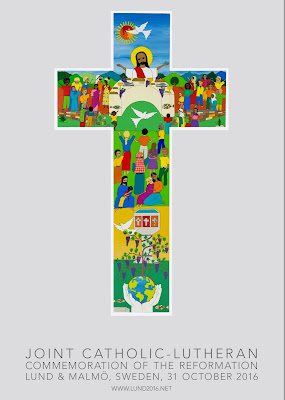 On October 31, the Roman Catholic Church and the Lutheran World Federation will hold a commemoration in Sweden for the 500th Anniversary of the Protestant Reformation.   The event will include the participation of Pope Francis, LWF President Bishop Dr Munib A. Younan and LWF General Secretary Rev. Dr Martin Junge.   It is part of a dialogue between the Roman Catholic and Lutheran churches regarding their common beliefs and practices.

The symbol of this event in Sweden is a cross painted by Salvadoran artist Christian Chavarria Ayala.  You can read about the images on this cross here.

Christian says he has painted around 250,000 crosses of different sizes and colors to raise awareness on issues such as poverty, water, globalization and peaceful coexistence. The crosses are the “best therapy to cope with difficult moments,” says Christian.

Christian grew up during El Salvador's bloody civil war.   In an attack on his childhood home, Christian saw the army massacre his siblings, and left for dead by the army, he eventually made his way to a refugee camp in Honduras.

In his own words,


I survived in a very miraculous way in the midst of death. We had to leave our home because of the war, fleeing to the mountains, running all the time from the soldiers of my country. Finally we got to Honduras and were taken into a refugee camp there named Mesa Grande. At the refugee camp in Honduras I learned to paint in the special style of my country. I only painted crosses because the cross was very significant for us.

The civil war was like carrying a cross every day. Suffering, pain, death; it was a difficult time. But we wanted to come back to our country, we wanted to create a new future, a different country. We wanted to transform the cross into a living cross. I did get back to my beloved El Salvador but sadly, when I was 16, I was threated again and had to flee.

I was sent to Sweden. I came to that good country as a refugee child. Alone. It was difficult but I survived. My therapy has been painting and music, when I feel sad I paint or play the piano. The colors and the notes become my world of relief. My crosses are around the world now, in approximately 119 countries. I serve at my church now as a volunteer. I am a lay pastor in a community in the rural area of El Salvador. We are born to serve, we are born to understand one another, we are born to love, we are born to live and be happy.

You can read a short autobiography of Christian and his incredible life story at the website Afflicted with Hope.