Nicaragua said on Tuesday it has given political asylum to former El Salvador president Mauricio Funes, who has come under scrutiny back home for a truce with gangs during his administration and is also facing multiple legal cases.

The Nicaraguan government’s official Daily Gazette published a notice announcing that Funes, his partner and three children have all been granted asylum. It said their lives and physical integrity are in danger as a result of “fighting in favor of democracy, peace, justice and human rights”.

Funes said via Twitter that he decided to seek asylum on 31 August “after confirming the political persecution that is being initiated against me”.

According to the Gazette, the petition was dated 1 September, the same day El Salvador’s supreme court ordered the release of a list of Funes’s government-funded trips abroad while in office. Asylum was granted the following day.


Mr Funes, a former journalist, moved to Nicaragua three months ago, after prosecutors began their case against him. They say he has not explained the origin of more than $700,000 (£521,350) of his income.

Following the announcement of his asylum, he posted a declaration of his innocence to his Twitter and Facebook accounts.

He said he had spent three months working in the Nicaraguan capital, Managua, before he decided to apply for asylum because of political persecution. He said there were plans by the "extreme right" to attack him.

"I have not given up fighting the judicial process or proving my innocence," he wrote.

Although all these investigations are ongoing, no formal criminal case has been filed yet against the former president.

Funes, of course, was elected in 2009 on the FMLN ticket with great optimism and hope for change in the country.  For much of his tenure he was the most popular elected leader in Latin America. The news that Funes chose to seek asylum outside of the country is a disappointment and points out a couple of things about El Salvador.   If guilty of corruption, he has let down millions of Salvadorans who voted for him, seeing the possibility of a new type of leader.   If not guilty of corruption, it is tragic that a former president would have so little confidence in the country's judicial system that he would not stay in the country and fight the charges against him.

No doubt driving Funes' decision is the fact that bail is frequently denied to persons accused of crimes in El Salvador, and you can spend months or years in prison before even coming to trial.   This was the case for former president Francisco Flores, who was jailed while on trial for corruption, except for periods of time when he was under doctors' care. (Flores died suddenly before going to trial).   By fleeing to Nicaragua, Funes has guaranteed that he cannot return to El Salvador while any charges are pending. 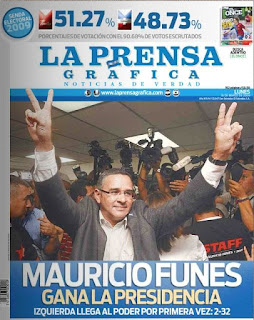 Carlos X. said…
Is it possible to be President of El Salvador and *not* be corrupt? The first modern democratic president, Jose Napoleon Duarte, was so tainted by corruption scandals that his party was politically banished by the voters. His successor, Alfredo Cristiani, was tainted by the horrific Jesuit massacre that happened under his watch (and some say through his complicity). Of course, Francisco Flores was myred in the astonishing scandal of having embezzled or at best misrouted millions of dollars of earthquake relief funds. His two immediate successors, Tony Saca and Mauricio Funes are currently under investigation for financial misdeeds and related corruption. So, I repeat, is there a place for an honest person in Salvadoran politics, or do you have to be corrupt to be president of El Salvador?
12:20 PM