El Salvador officials have attributed a steady decline in the violence-wracked country’s homicide rate to the government’s crackdown on gangs, but it is too early to confirm this causal relationship or to determine whether the improvement will endure.

Coto said homicides dropped from an average 23.8 per day in January to a daily average of 11.3 in May. Homicides declined gradually over the first five months of the year, registering a rate of 22.9 per day in February, 19.7 in March, and 11.7 in April. He added that figures for the first week of June indicated the drop is set to continue, with an average of 7 per day.

La Prensa Grafica reported the total number of homicides for the first five months of 2016 at 2,705. The trend for the year so far represents a dramatic reversal from the upwards trend registered from the beginning of 2015, which saw the daily homicide average increase from 10.8 in January to 20.7 in May. 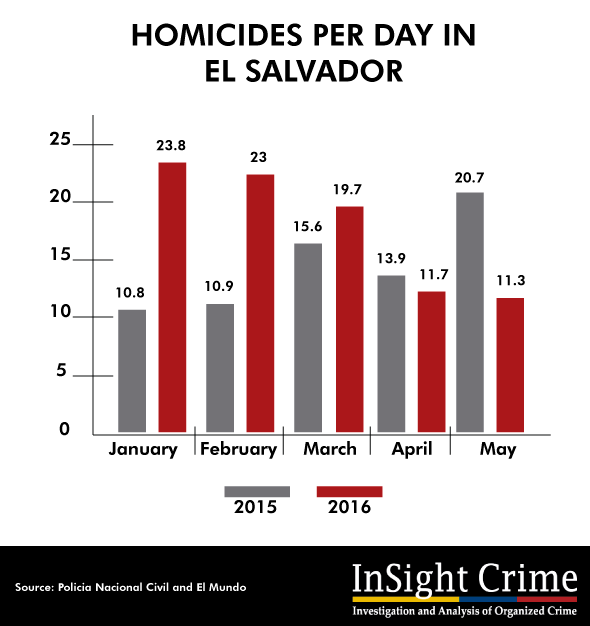 The lower homicide statistics come as El Salvador continues to push its “Mano Dura” (Iron Fist) security policies. At the beginning of April, the government enacted a package of "extraordinary measures" designed to combat the country's powerful "mara" street gangs, most notably the Mara Salvatrucha (MS13) and Barrio 18. The measures target the ability of imprisoned gang leaders to effectively operate from behind bars.

While lower homicide trends are a positive sign, the overall security situation in El Salvador remains dire. The country is still wracked by criminal violence, and it is unclear how effective the government’s hardline approach to the issue has been.

The militarization of the gang conflict has also lead to concerns about human rights violations, as lopsided body counts are reported in what security forces describe as clashes with criminal gangs.

The most dramatic decrease in daily homicide rates actually came in April after gang leaders themselves ordered their members to stop the killing in an unsuccessful attempt to dissuade the government from enacting the extraordinary measures. In subsequent public statements representatives of the gangs have taken credit for the lower murder rate and threatened to step up their violence if the government persists with its hard line.

However, the jury is still out on precisely what has caused the daily murder rate to fall and whether or not the reduced rate will hold.