May 05, 2016
For too many years, the words "violence" and El Salvador have been inextricably linked.    Two recent publications offer different, but complementary, looks at violence in this Central American country.   Neither one offers a solution, but both help provide a deeper understanding that might someday help lead towards solutions.

A few weeks,ago this blog described the pastoral letter of  Roman Catholic archbishop Jose Luis Escobar Alas titled I See Violence and Strife in the City.   In his letter, San Salvador's archbishop explains why it is necessary to examine the historical roots of the current paroxysm of violence in El Salvador: 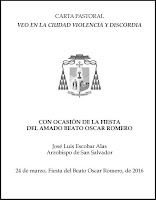 The magnitude of the effects of the current violence compels us all to seek immediate solutions, most of which cause us to forget that violence in El Salvador  is  a  problem  that  is  rooted  in  a  past  that,  has  either  been  ignored  or concealed,  or  reported  in  a  one-sided  fashion,  corresponding  to  the  interests  of those relating it and forgetting that only “the truth will set you free” (cf. Jn 8:32). As a result, we see the persistence of violence, not as a response to a stimulus that the  physical  or  social  environment  casts  on  individuals,  but  as  a  mystery  of iniquity  where  it  appears  as  a  structural  and  institutionalized  sin.  Fr.  Ignacio Ellacuría, SJ explained in 1973 that: “violence is a symptomatic fact that demands reflection.”

Msgr. Escobar proceeds to a detailed overview, both sociological and theological, on the problem of violence in El Salvador, starting with the Spanish conquest of the Americas and proceeding to the current day.

A different perspective on violence is offered by Óscar Martínez in his book A History of Violence: Living and Dying in Central America.  Martínez is one of the investigative journalists at the online periodical El Faro.   His first book was The Beast, a highly-acclaimed description of the perils of Central American migrants who try to make the journey north to the US.   His new book gives you the reasons why they flee.

A History of Violence is a collection of Martinez' reporting in El Faro on the subjects of crime, gangs, and narcotics trafficking in Central America.   In Martínez' gripping narratives you meet gangsters, corrupt police, hit men, snitches, and victims.   Martinez is driven to understand deeply such things as the social hierarchy in a hellhole called a Salvadoran prison, how someone can survive as a free-lance drug-trafficker in Central America, the pervasiveness with which narco-trafficking has infiltrated the Guatemalan government and police, or what is the future for the gang member who agrees to testify against his former gang.

In the introduction to the A History of Violence, Óscar Martínez answer the question why a North American audience should read these essays showing some of the darkest sides of Central America:

Because I believe knowing is different from not knowing.   I believe that knowing, especially with people like yours, who know how to wield politics, is the beginning of a solution, I believe...that knowing is what moves the waves.   You can be one of the waves.