May 04, 2016
The homicide rate in El Salvador dropped more than 40% from March to April this year, and yesterday the government issued orders to arrest more than 20 people involved with the 2012 "tregua" or gang truce which produced a similar homicide reduction of more than 50%.  The confluence of these two events is emblematic of the confusing state of public security policy in El Salvador.

Murders dropped from more than 600 per month in the first three months of the year to 352 in April.   The causes are disputed according to Insight Crime:


El Salvador's government has claimed credit for a dramatic drop in homicides last month, but the country's powerful criminal gangs say they are behind the decrease in violence.

April saw 352 people murdered in El Salvador at an average of approximately 11 homicides per day, according to police statistics. Overall, this represents a 42 percent drop from the total number of homicides registered in March, reported La Prensa Grafica.

As shown in the chart below, produced by investigative news outlet El Faro, not only is April the least violent month El Salvador has registered so far in 2016, it is also the least violent month since before March 2015, just after the government brokered truce between the "mara" street gangs the Mara Salvatrucha (MS13) and Barrio 18 broke down completely. 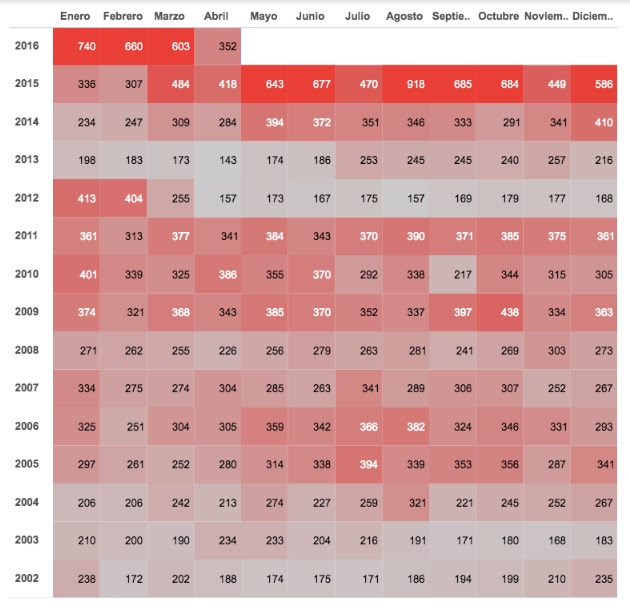 
The reduction in homicides in 2016 commenced Easter weekend when gang spokesmen announced they were ordering a unilateral cessation of killings.    The number of murders in the country had a measurable drop immediately.    The gangs' action coincided with the government of Salvador Sanchez Ceren rolling out "extraordinary measures" to take greater control of the country's prisons, move convicted gang leaders into isolated confinement, and deploy highly armed special reaction forces to the most crime-ridden neighborhoods.

The government has taken credit for a portion of the reduction in homicides, asserting that the extraordinary measures are having an effect.   Still, it is too soon to know if this reduction in the homicide rate, which still amounts to almost 12 murders a day, will continue.

The lowest level of homicides in the past decade was achieved during the 2012 gang truce which had impact between  March 2012 and July 2013.   Yesterday, El Salvador's government moved to arrest public officials and a prominent mediator who were involved with sponsoring the 2012 truce.


The Attorney General's Office said Tuesday that arrest warrants have been issued for 21 people tied to a 2012 gang treaty that temporarily lowered El Salvador's homicide rate.

Attorney General Douglas Melendez said Raul Mijango, a onetime guerrilla who brokered the treaty, is among those arrested along with 17 former government officials and three ranking police officials. Among the charges they face are illicit association and introducing contraband into prisons.

"Even though the truce is not illegal, other crimes were committed within the framework of this kind of illicit negotiations," Melendez said.

El Salvador's government has since ruled out any further negotiations with the gangs....

Melendez suggested that gangs also benefited from relaxed security at the prisons, allowing inmates access to cellphones, TVs and other banned items. He alleged that Mijango smuggled contraband items into prisons.....

While the truce temporarily brought down the country's high homicide rate before it dissolved in September 2013, Melendez suggested the perceived gain was an illusion.

The truce "promoted the strengthening and expansion of the gangs' territories," he said. "We have proven that. While the homicide rate may have gone down, at the same time disappearances increased, and that created what came to be known as clandestine burial sites."


El Salvador has arrested former congressman Raul Mijango, who brokered a controversial gang truce in 2012 that reduced murders in the violent Central American nation by half.

Mijango, a former guerilla commander and lawmaker with the ruling Farabundo Marti National Liberation Front, or FMLN, was arrested on allegations of bringing banned objects into prisons and being an associate of gang members, police said on Twitter.

The truce, mediated by Mijango in 2012, lasted until 2014, and won approval from former leftist President Mauricio Funes and the Organization of American States.

The pact was broken by public criticism that the deal was too beneficial to the gangs, which took advantage of less police pressure to rearm.

In addition to Mijango, the persons arrested included nine prison guards and officials, police, and military.  The arrests were announced by new attorney general Douglas Melendez.  When he took office, Melendez announced that he would push forward with stalled investigations including the investigation of the 2012 truce.   Yesterday's arrests are the first example of his determination.   The arrests also mirror new criminal laws passed by the National Assembly last month which are designed to impose penalties on government officials and others who would strike deals with the gangs.

The government's actions reemphasize that there will be no return to negotiations and treguas as a way to bring a reduction to the murderous violence in the country.   What remains to be seen is whether the country can ever experience a return to the reduced level of homicides experienced during the 2012 truce.   The 2012 truce brought a reduction in violence, but may also have allowed the gangs to strengthen and reorganize during a period when they were not killing each other.